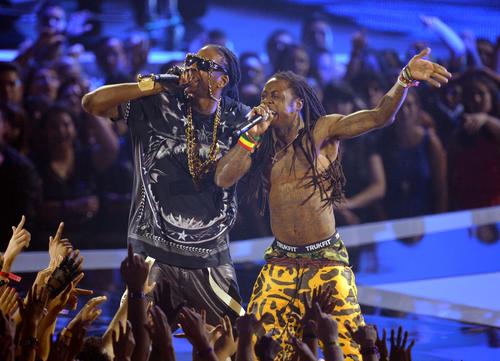 Ever since dropping f his Pretty Girls Like Trap Music album back in June, 2 Chainz has been busy lending out features to other artists in the game, including Jeezy, Eminem, Young Dolph, Gucci Mane, Lil Pump, & Zaytoven to name a few, but it appears that’s not all who 2 Chainz is working with. According to the ATL veteran, he and frequent collaborator, Lil Wayne, also have some more heat on the way.

Announced on Instagram early Wednesday morning, 2 Chainz wrote the following caption, “ME AND MY BROTHA GOTTA ANOTHER 1 ON THE WAY ??????????????????#SHIRTBYDONATELLA,” while sharing a picture him and “his brother” Lil Wayne in what looks to be the club.

It’s unclear if the song will be apart 2 Chainz’s upcoming album, which he just announced last week, or be a collab f the reloaded version Lil Wayne’s Dedication 6 mixtape that’s on the way, but my guess would be the former. Hell, it’s even quiet possible that 2 Chainz was hinting at a sequel to their 2016 joint project Collegrove, but that’s just wishful thinking for now.

While we wait for further info on Dedication 6: Reloaded or Chainz’s next album to surface, check out the IG post (below) and keep your eyes peeled for some ficial announcements. Who else would you like to see on 2 Chainz’s next album?