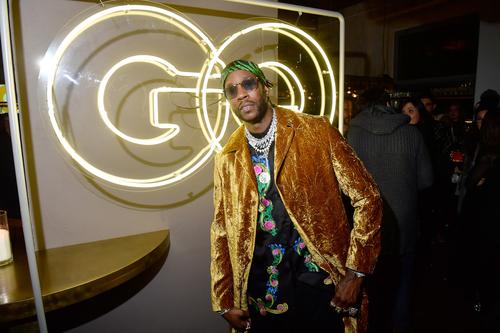 2 Chainz has long been known as one the more stylish men in the rap game, but in 2018, he looks to be set on taking his game to the next level. As per Sole Collector, the Pretty Girls Like Trap Music star and luxury clothing brand Versace have teamed up for a new collection sneakers that fall under the moniker “Chain Reaction.” As you might expect from both those parties, these kicks are nothing if not distinctive.

With a boxier-looking silhouette, one that is in keeping with the current footwear trends, the shoes are highlighted by some chain-style detailing (coincidence?) and bold, bright colors, the latter which is a hallmark both Versace and 2 Chainz’s unique fashion personas. There’s no telling how much or what kind say he had in the design the shoe, but the ATL veteran was very much involved with the sneaker’s debut on the Milan Fashion Week runway, where he was on hand at the live show.

According to WWD, the “Chain Reaction” sneakers will soon be online for purchase (think March or so), but likely only in limited quantities and perhaps even only select designs. It’s a bold move for both Versace and their rapper collaborator, who might be looking to insert himself into a streetwear market that has been increasingly dominated by the titans the rap music genre, like Kanye West. This could be a venture that, along with a new album that is supposedly in the works, makes 2019 quite the pritable year for 2 Chainz. Check out some images the new shoes, courtesy Sole Collector and Getty s, below.

Are you down with the new 2 Chainz x Versace kicks? Let us know in the comments.