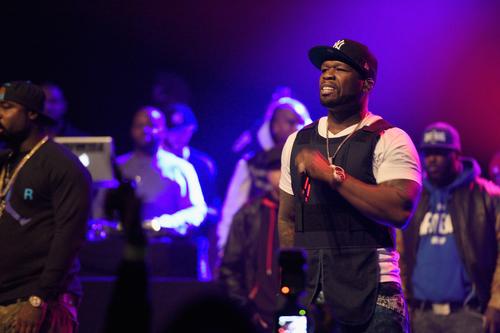 50 Cent is a man who doesn’t like to be toyed with, which why it comes as a surprise when he seems to be dishing it out in the direction an old adversary: UFC fighter Conor McGregor.

You may remember that infamous press conference where, in front thousands people in New York, called Fif a “bitch” and then proceeded to rail against him and Floyd “Money” Mayweather some more. 50 clapped back at the time, deflecting the comments as nonsense. You can see that reaction post from back in the day below.

Now, the rapper is saying that he could take Conor McGregor in a street fight, no problem. During a promotional tour stop for his upcoming film Den Thieves, Fif told the U.K.’s Express. “They don’t understand this is heavyweight shit going on around here. I hit them, they see a white light. They hear a message. Slow down, boy. They think Jesus is talking to them …] Outside the confinements the sport. If you got into a street] fight, it’s a different thing.”

He also noted the height discrepancy between the two them, commenting: “Right now, when he’s at 154 pounds? I’m 225 right now.” Clearly, the emcee has some confidence in his physical abilities but, even in a street fight, there’s no doubt that McGregor would bring some formidable skill and speed to the table. One thing is for sure: the bout, however disciplined, would be fun to watch.

RELATED: 50 Cent Explains His Diddy “Gay And Happy” Meme On “The Breakfast Club”

Do you think 50 Cent would be able to take Conor McGregor in a street fight? Or would the UFC star make this a no-contest sparring match? Have your say in the comments.