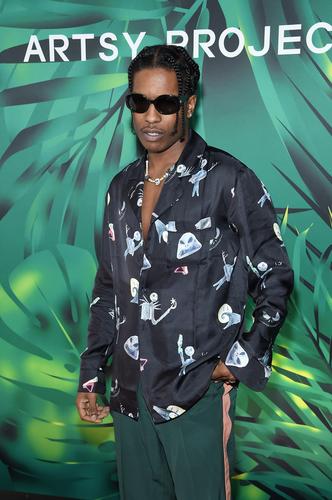 A$AP Rocky hit up Twitter to share some updates to his AWGE interface that continues to boats an old school feel. If you haven’t noticed already, AWGE.com is showing some new merchandise for loyal fans, a fun online forum to join in on and a new video compilation the Mob crew.

The new release AWGE apparel is hard to miss, that can be shopped now but will most likely be shipped out on February 1st. The ferings are hoodies, hats and shirts with “AWGE” placed accordingly. Check out the looks below that are going for $60-$100.

The Forum is a notable feature on the site that looks exactly like the old school Windows desktop, with live updates from fans adding gifs, pics, comments and memes.

The DVD Vol. 2 gets another mention as it sees Rocky and his crew busting out freestyles over some heavy beats and we even see Lil Uzi Vert smokin’ up. Watch that here.

The sites new updates don’t lend too much more information on Rocky’s upcoming album – unless someone has happened to see any clues. Earlier this month we reported on some possible snippets a song that may be on his new project. A caption on his Instagram story read “Testing?” The clip started with atmospheric sounds before Rocky was heard in a pitched down tone. Only time will tell if it’s for real.