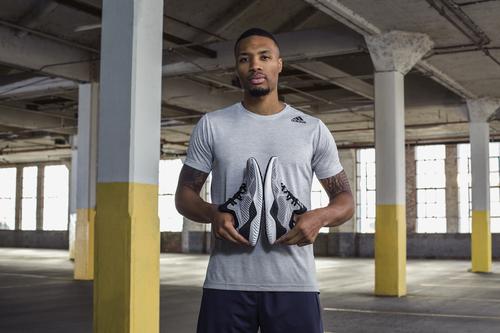 Adidas And Damian Lillard Introduce The AlphaBounce Beyond

Adidas has just introduce the AlphaBounce Beyond, the sequel to the beloved running sneaker, as part the brand’s “Run The Game” campaign featuring signature athletes such as Damian Lillard, Landon Collins and soccer star Florencia Galarza.

The AlphaBounce Beyond, one the only training shoes built for running with heel to toe cushioning, is updated for more versatile multidirectional movement including a wider midsole and forged zones for stability and quick cuts and a Continental Rubber outsole for more traction on all surfaces.

“Athletes want to be the best at their specific sport and they understand that running is a key factor in obtaining their goals. adidas has worked with a range vertical athletes – those who compete in sports such as soccer, football, basketball, baseball, field hockey, tennis and boxing – as well as versatile athletes – those who are cultural leaders in dance and modeling – to develop a running shoe that will give them the edge over their competition, making them the best on the court, field or pitch,” said Andy Barr, Product Category Director for adidas Running.

According to Adidas, this unique upper works as one with the foot thanks to the built-in stretch areas that support the linear and lateral movements required in multi-directional agility training. The shoe combines a dynamic BOUNCE midsole, a responsive foam engineered to integrate an elastic feel to each step, with a Continental outsole, which provides superior grip for athletes training on any surface, from the polished wood a basketball court to the freshly cut grass a football field.

The AlphaBounce Beyond will available on adidas.com for $120 starting tomorrow, January 17th and in-store worldwide starting January 24th with more colorways rolling out in February.