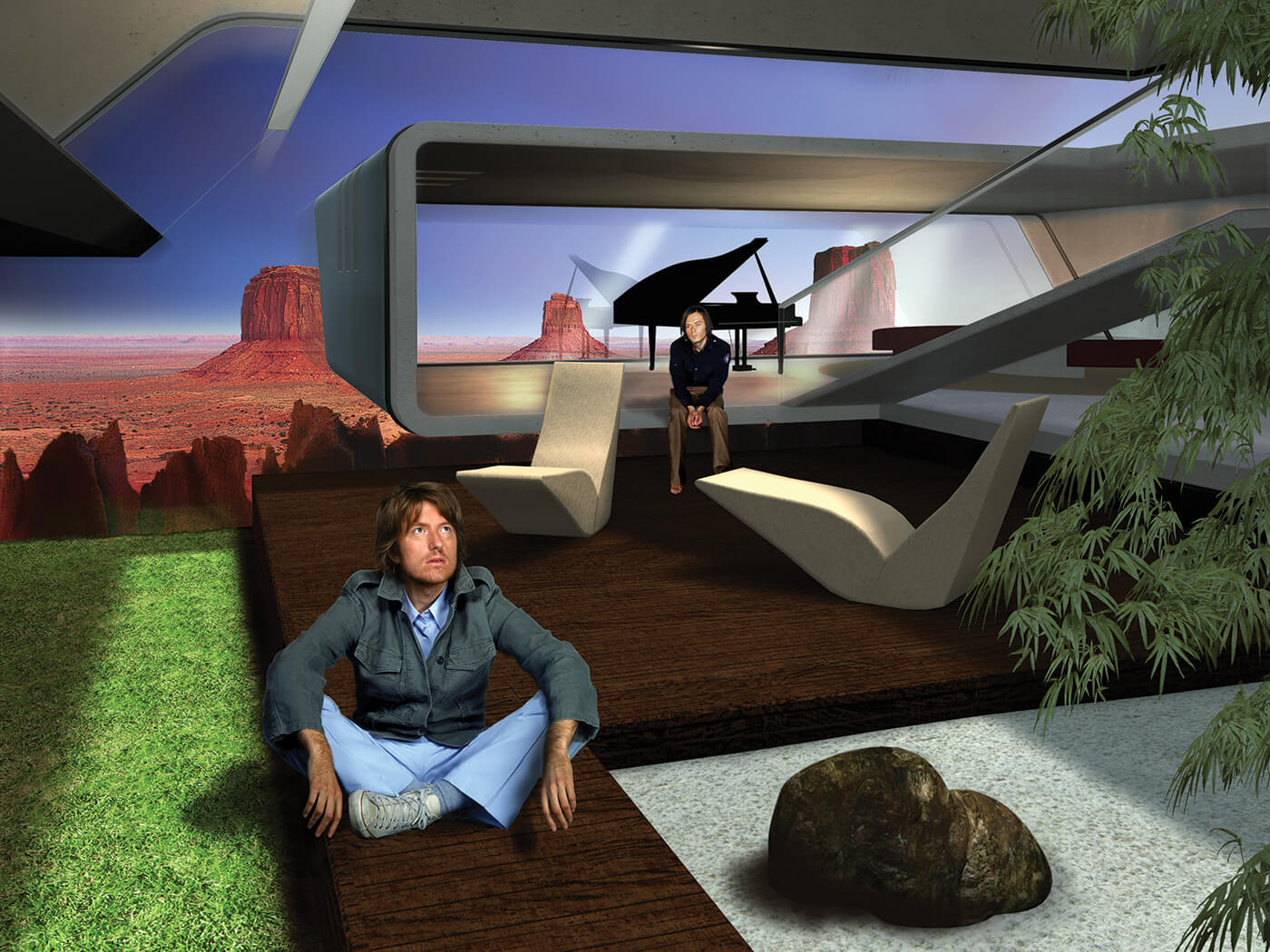 Suddenly everyone had somewhere else to be – at least, that’s how Air remember the playback of their second album to Virgin’s UK executives. “After about 10 minutes, they were like, ‘Oh, we have a meeting we can’t postpone,’” says Nicolas Godin. “They were in panic. It was a big disaster for them… they were expecting Moon Safari 2.”

Godin and Jean-Benoît Dunckel weren’t displeased by the reception. Their debut LP had been everywhere in 1998 and ’99 – from primetime radio to dinner parties – and they were keen to shatter preconceptions and prove what else they could do. It seems they succeeded: it’s tough to imagine them making a more alienating album than 10 000 Hz Legend, resolutely earworm-free and impossible to pin down.

Some of it is intensely serious, such as the eerie closer, “Caramel Prisoner”; some almost throwaway, like first single “Radio #1”, its Berlin Bowie strut complete with a fake DJ chipping in at the end. Other moments are just plain bizarre – the ridiculous “Wonder Milky Bitch”, a mutant take on Nancy & Lee. Almost every song is disjointed, full of separate sections with shifting tempos and arrangements: “Don’t Be Light” moves from bouncing electronics to sci-fi strings within its first five seconds. Elsewhere, harsh synths collide with acoustic guitars, rasping Vocoders butt against sublime untreated vocals, and glitching drum machines spar with lush orchestras. Little wonder that some dubbed the
album a prog-rock folly on release.

Twenty years on, though, the world has changed, as have the connotations of prog, and 10 000 Hz Legend has never sounded better. It’s back as a deluxe CD reissue, featuring a bonus track, a disc of rarities and the whole album in Dolby Atmos and 5.1 format.

As a whole, it’s still an unwieldy, awkward beast, but the peaks are impressive. The opening “Electronic Performers” oscillates between bucolic piano-and-strings sections, and overdriven drum machine and electric guitar, building to a drop that never comes. “Machines give me some freedom/Synthesisers give me some wings”, they proclaim, voices digitally pitched down. “Sex Born Poison”, featuring Buffalo Daughter, moves daringly from Melody Nelson acoustic picking to an apocalyptic middle section and then finally a crescendo of synths, strings and horns.

“How Does It Make You Feel?” is a gorgeous, melancholic ballad, boasting the finest chorus on the album, and a computerised Mac voice blending with a human choir. The juxtapositions between the robotic narration and its declarations of undying love are affecting – but Air can’t resist puncturing the mood with a joke at the end. Disc Two features an illuminating demo version, including a piano part which amusingly (and surely accidentally) resembles the theme to Randall And Hopkirk (Deceased).

Air’s live act had been elevated after Moon Safari thanks to the involvement of some of Beck’s backing band, especially bassist Justin Meldal-Johnsen – their raucous, fuzzy live versions of “Electronic Performers” and “How Does It Make Your Feel?” are highlights of Disc Two here. On 10 000 Hz itself, though, Beck was enlisted to add some of his customary brilliant nonsense to “Don’t Be Light” (“We bang on gold tambourines/In the cross hairs of some transient gun…”) and write the folk-funk of “The Vagabond” around an incomplete Air demo, which we also get to hear on Disc Two. Elsewhere, Meldal-Johnsen, keyboardist Roger Manning Jr and drummer Brian Reitzell are crucial to the grooves of “Don’t Be Light”, “Radio #1” and “Radian”. The latter is one of 10 000 Hz…’s loveliest tracks, moving from ecstatic ambient drone to a skipping bossa nova with duetting flutes and strings. It raises the sobering thought that very few groups could afford to make an album on this scale today, orchestral sessions at Capitol Studios and all.

The sole bonus track, “The Way You Look Tonight”, originally released on the 2002 remix album Everybody Hertz, was finished too late to make 10 000 Hz…, but its final minute, full of static-y synths and crashing drums, connects it to the outlandish mores of its parent album. However, the rest of the song, melodic and subdued, anticipates the more organic, straightforward feel of 2004’s Talkie Walkie.

Viewed from one angle, then, 10000 Hz Legend is an ugly diversion in Air’s otherwise natural progression, a roadblock on the sensible route from Moon Safari to Talkie Walkie. But in other regards, it’s crucial to their journey: their most fascinating record as well as their most frustrating, an out-of-time album that’s been pulled gloriously into focus by the passing years. Vive la différence.