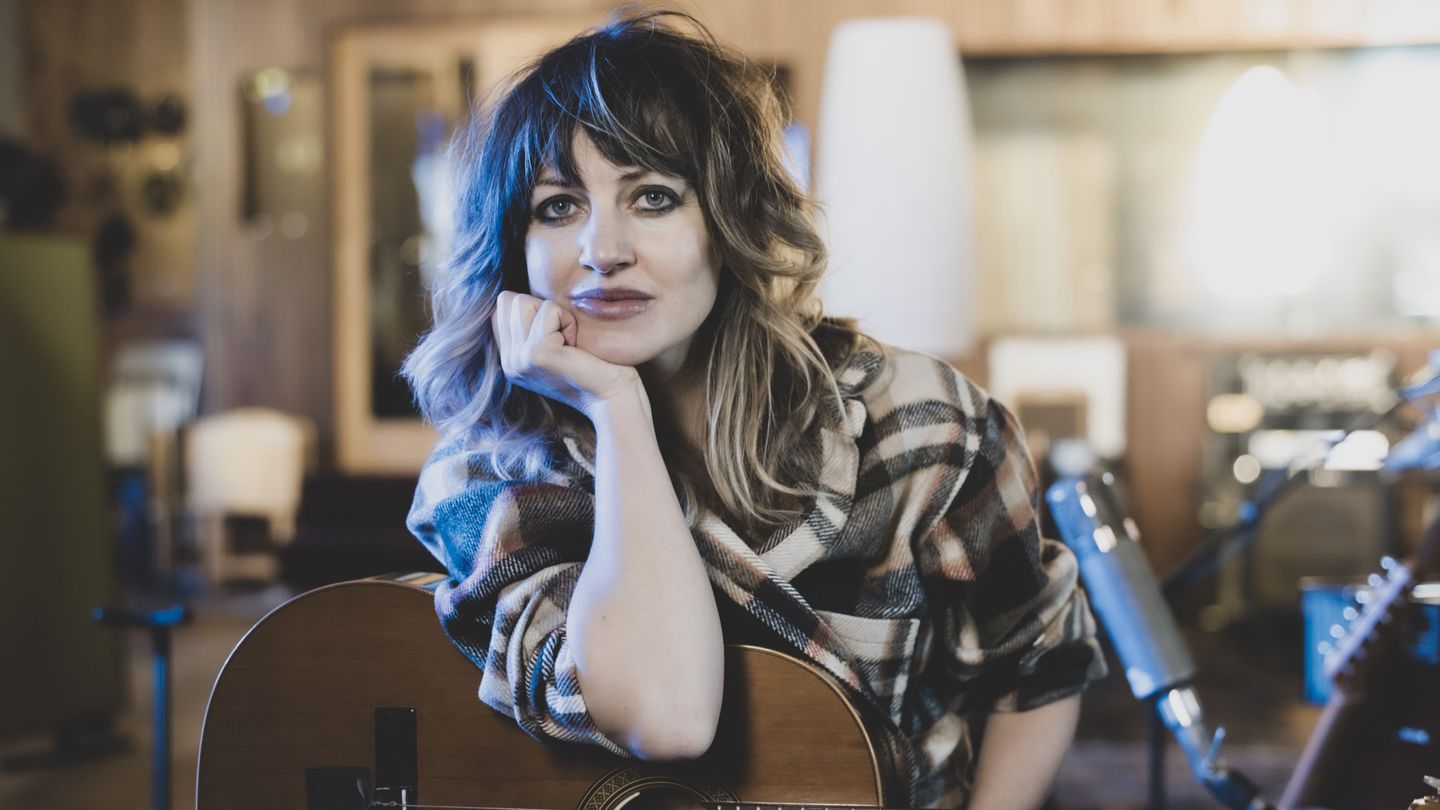 “Watershed,” the closing track on indie-folk songwriter Anaïs Mitchell’s first solo record in 10 years, is a reflection of where her life has taken her. Despite releasing her last collection, Young Man in America, in 2012, she’s stayed notoriously busy throughout that timeframe. Her 2010 studio album, Hadestown, was transmogrified into a full-blown Broadway musical, and it won eight Tonys in 2019, including Best Musical and Best Original Score. The following year, she gave birth to her second child. She also formed an indie-folk supergroup, Bonny Light Horseman, alongside two fellow folk mainstays: trusted collaborator of Taylor Swift and The National Josh Kaufman, and Fruit Bats frontman Eric D. Johnson.

That’s why “Watershed” chronicles Mitchell’s journey: It explores the trek for discovering one’s purpose in life, and how that experience can feel gradual and imperceptible. “The tallest summit you look up to, someday it’s gonna look small to you,” she sings. “There’s a new one coming into view.”

“That word kept coming back to me because I found myself at a watershed moment in my life,” Mitchell tells MTV News. “But I felt like, ‘Oh, I’m looking back and seeing everything in my rearview mirror. There’s this new terrain, and I don’t know quite what it is, but I’m at a moment where I can see it.’ You don’t get that many of those moments in a lifetime, but they come at different times.”

The prolific folk artist didn’t intend to take a break from solo music for a decade. But that’s exactly why she didn’t make a solo record for this long: She didn’t actually take a break. Mitchell became preoccupied with other projects, and she enjoys dedicating her energy to one endeavor at a time. After finishing up her work on Hadestown, Mitchell retreated to a “weird, old church” in Hurley, New York, to create her new self-titled album, out Friday (January 28), alongside her closest friends and collaborators. The list includes her Bonny Light Horseman bandmate Kaufman, The National’s Aaron Dessner, and strings savant Nico Muhly. That sense of companionship is palpable through the music.  On songs like “On Your Way (Felix Song)” and “Brooklyn Bridge,” she’s surrounded by rich arrangements and warm performances, courtesy of her close creative partners.

Mitchell spoke with MTV News about what it was like returning to solo music, how Broadway and the indie-music realm are both similar and different, the musical and non-musical inspirations behind her new record, and more.

MTV News: How are the worlds of Broadway and indie-folk music different?

Anaïs Mitchell: I think a lot of people had this experience in the pandemic, but I went to a private space that I hadn’t been in a long time. I had a very dramatic exit from New York City. We were living in Brooklyn, I was nine months pregnant with our second baby, and when the pandemic hit New York, I just didn’t want to give birth in the city. So we fled [to Vermont]. It was one day, we took our only kid out of school. Then we didn’t have a car. We had given up our car because we didn’t need it, so I was like, “We’re buying a car! Let’s go buy a car so we have an escape vehicle.” Then the next day, Broadway shut down and I was like, “We’re out of here.”

I was a little bit shielded from the public eye [of Hadestown] because I’m the writer. People were so focused on our incredible actors that it didn’t feel like I was the figurehead of that show, but it did feel like a lot of public time. It was all a learning curve for me; I had never done that before, where you go to a new opening of a musical or play. There’s a red carpet and you have to look good and get your picture taken, and then it shows up on the internet. It was fun and exhilarating [to go to Vermont] and just be like, “Wow, no one can see us now. We’re just in the middle of nowhere.”

MTV News: With Hadestown, you got to be behind the scenes, but you have a Tony now. Does it feel like having a bigger audience has changed your writing process?

Mitchell: I don’t think it’s changed my writing at all. I feel like I’m only capable of writing what passes through my heart. I know what you’re talking about though because a lot of folks on my social media are from Broadway. I notice this because when I post something about Broadway, everyone is like, “We like that!” And then I’m like, “My folk band made a new record,” and it’s just crickets! It’s not entirely like that, but I’m aware that a lot of folks did come from that world.

But they’re not worlds apart. It’s storytelling through music, and that’s what happens on Broadway, and that’s what happens with songwriting for Bonny Light Horseman and also this record. These stories happen to be my own ones. This album is not larger than life. It is life-sized. The songs are all me singing them. I’m the speaker in the song, which is a sort of rarity for me.

MTV News: How does writing for Broadway differ from writing a traditional album?

Mitchell: Hadestown began as a stage show before that studio record came out in 2010. There was this early Vermont, DIY community-theater version of the thing. It was pretty abstract, but it was a theatrical event, not just a concert. The intention was always for it to be an opera or a musical. It wasn’t a loosely affiliated collection of songs that then became adapted. But the grad-school part of learning how to write Hadestown, what works for the music world doesn’t cut it for the theater. The audience needs there to be results at the end of the songs, like a revelation or a decision that gets made. You go from A to B. That is how the story moves along and the characters move along. So I think writing folk songs or pop songs is very circular. You set up a thing, then you return to the chorus, and there’s this beauty in the roundness of it.

MTV News: What were some of the musical or non-musical inspirations behind this record?

Mitchell: Returning to my childhood home, a lot of stuff came out of that. I was living in my grandma’s house. I had this new baby. I found a box of my old journals from high school and college. I read a bunch of them. I burned some of them because they were so embarrassing. I found these letter correspondences between my grandma and me. I had a lot of memories of that house and what it was like being a child there. It feels cliché to say it, but it was a powerful time for me to return home. There was a lot in my rearview mirror. You know how it is when you’re in the place where you grew up and you run into your English teacher from ninth grade or your friend’s mom. There’s this meeting of the minds where you’re like, “I’m a grown-up now.”

It’s amazing how some objects hold so much power, like these journals. Or this one dress or mirror in my grandma’s house, and I remember my grandma getting dressed in this mirror. All these objects feel like a portal through time, these chairs, these spoons, the garden, the smells and sounds of the place you grew up. It’s really deep and bypasses your conscious mind. It goes right to the heart.

MTV News: You have so many albums under your belt now. How do you think your self-titled record fits within the broad landscape of your discography?

Mitchell: I think I’m the last person to know! I never listen to my old records because I can’t handle it. It’s a more mysterious and intuitive thing than being like, “I’m gonna try to do something like this.” But I would say there are a few things that made this process really different. The way that we made [Bonny Light Horseman] was very live and field recording-ish in a way. Half of the record we recorded at this artist residency. We were in this room in Berlin with the mics set up, and we’d be like, “Hey, someone’s in the hall! Hey, it’s one of [folk group] the Barr Brothers! Will you come in and play drums on this track?” That’s the way in which it felt like a field recording. Josh [Kaufman] is very good at capturing a live moment. He’s very focused as a producer, but he’s got that Jedi thing where it feels like you’re just hanging out, but he’s chasing a sound and a feeling. He shines in the world where the music shines and catches a vibe. I didn’t know that’s what I wanted for this, but it quickly became clear that that’s how we were going to make this record.

MTV News: What’s one thing that you hope people take away from this album?

Mitchell: As a songwriter, I have more and more interest in what the intersection is between what feels true for me, and where that intersects with what is universal and mythical. I hate to even say it. I don’t want to make a mom record, but these things are real for me. I hope it speaks to people who aren’t in my particular life phase. I’d love it if it would speak to people at different places.