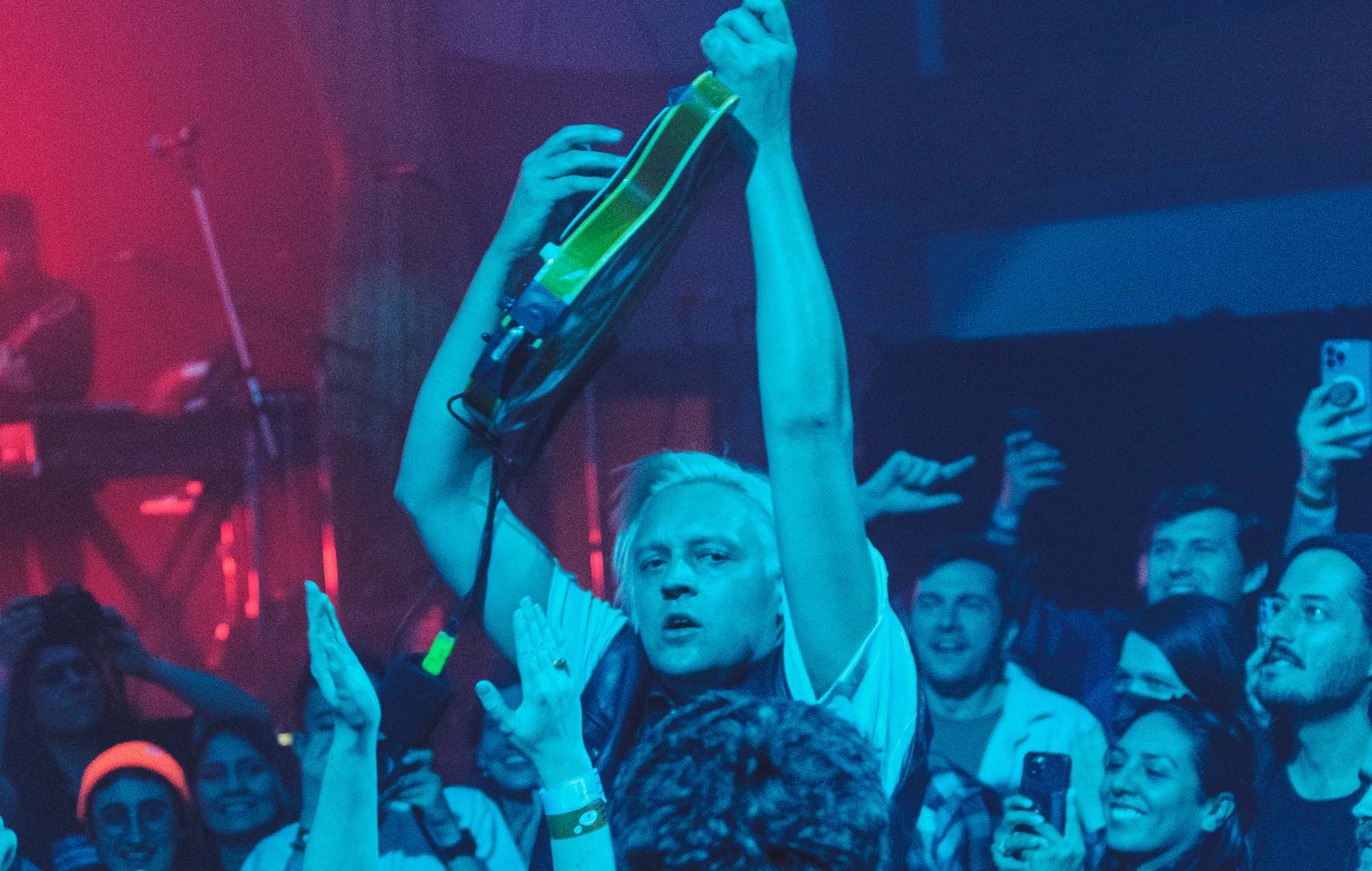 The Canadian rock band’s unexpected gigs, which took place last week from March 18 – March 21 at New York City’s 575-capacity Bowery Ballroom, were signalled via flyers and social media posts only a few short hours before taking place. Each night required a wristband and “pay what you can” donation to the relief fund from fans.

Would-be attendees were required to either show up to the Bowery Ballroom’s box office to grab a wristband before they quickly sold out or had to follow clues posted online by Arcade Fire in hopes of finding someone distributing passes to the show somewhere in the city.

In one instance, a fan ran into frontman Win Butler, who was playing basketball at the Canal Street Basketball Court with volunteers as they handed out coveted wristbands for the final show, which took place last Monday (March 21).

In total, the shows raised more than $100,000 for the people of Ukraine. Marika Anthony-Shaw, co-Founder and CEO of the non-profit PLUS1, told NME how the funds will be used for “supporting humanitarian aid like food, shelter, and medical treatment” for the 10 million citizens forced to flee their homes and seek asylum after Russia’s February 24 invasion.

“The money raised by Arcade Fire and their fans will support direct service organisations with deep ties to the community, who can quickly and effectively deploy funds, including Nova Ukraine, People In Need, United Help Ukraine, and World Central Kitchen,” she said.

“We will also be distributing funds to organisations serving the most vulnerable and those at highest risk of marginalisation. The PLUS1 Ukraine Relief Fund was designed to be responsive to disaster response, where needs and circumstances can change by the hour.”

The band’s NYC gigs followed their benefit show in New Orleans which took place on March 15 with all proceeds also going to Ukraine relief efforts.

Anthony-Shaw spent eight years as a member of Arcade Fire, before she was inspired to “hang up her touring shows and work to lead PLUS1 full time” according to the org’s website. Since it started, the non-profit has worked alongside musicians to raise money for organisations like ACLU, Partners in Health, War Child, MusicCounts, and more.

“We invite artists to support the fund in whichever way they are comfortable including shows, merchandise sales, and fan activations,” she told us regarding Arcade Fire’s recent round of benefit shows. “Most importantly, we ask that artists use their platforms to demand attention for the humanity and dignity of refugees in Ukraine and worldwide.”

Each of the four nights unlocked unique experiences for fans. Multiple shows ended with a parade in the Delancey Street subway station, and also saw the band adding new songs ‘The Lightning, I, II’, ‘Age of Anxiety’, and ‘Rabbit Hole’ from their forthcoming sixth album ‘WE’ to their career-spanning setlist.

The spontaneous run of shows ended on the night of March 21, with appearances from  David Byrne and actor Mike Myers. The former Talking Heads frontman joined the band for a rendition of John Lennon and Plastic Ono Band’s 1969 single ‘Give Peace a Chance’, while the Austin Powers and Wayne’s World screen icon delivered a political speech.

“You can have the government you want, but once you lose democracy, you are fucked. And so, for the people of Ukraine, I just want to say keep fighting, we’ll support you. Democracy is the way to go,” he said.

Myers continued: “My parents fought the fascists in World War II, this is a real thing. I just want to say, we’ve all been asleep. We’ve all been in COVID hibernation. And now ladies and gentlemen – it’s time to wake up.”

Arcade Fire’s upcoming album ‘WE’ will arrive on May 6 via Columbia Records and has been produced by Arcade Fire’s Régine Chassagne and Butler, along with long-time Radiohead collaborator Nigel Godrich.

Tonight in the UK, Concert For Ukraine will see performances from the likes of Manic Street Preachers, Nile Rodgers & Chic, Paloma Faith, Camila Cabello, Becky Hill, Anne Marie and Ed Sheeran. Ukrainian band Antytila spoke to NME about their hopes of performing remotely as they fight from the frontline of Kyiv, after their request was denied.