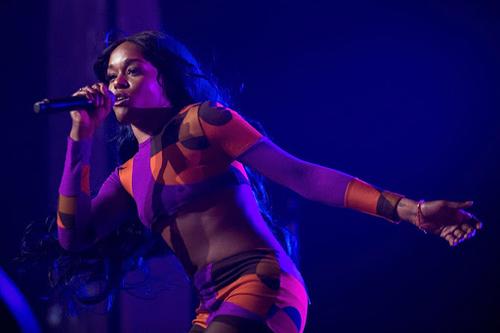 Yikes… Azealia Banks did not hold back regarding her feelings towards Cardi B. Azealia is gearing up to release her upcoming mixtape Fantasea II: The Second Wave in March but, as we all know, Miss Banks has a habit getting into the news for reasons other than her music.

The Harlem product is stirring the pot by attacking fellow female rapper Cardi B in the Instagram comments A Tribe Called Quest member Jarobi White. White reposted a video Cardi ranting about how she feels a need to flaunt her money and belongings to remind the haters that she’s made it. What happened in the comments section was unexpected though. Azealia Banks clapped back at Cardi, writing to the ATCQ member, “Ewww. You’re getting unfollowed for posting this illiterate untalented rat.” Banks continued, “This bitch is not an artist if anyone needs to humble themselves. It’s her.”

RELATED: Azealia Banks Criticizes Cardi B Yet Again; Compares Her To Iggy Azalea

Cardi B has obviously had a recent string success and this could simply be a ploy for Azealia to get attention and boost exposure for her upcoming project. While she has only released a few songs, Cardi has become one the hottest names in the game. Banks is clearly shooting for the top – whether or not this is the appropriate approach is to be seen. Peep the comments to the video below to see Azealia’s roast session on Cardi.