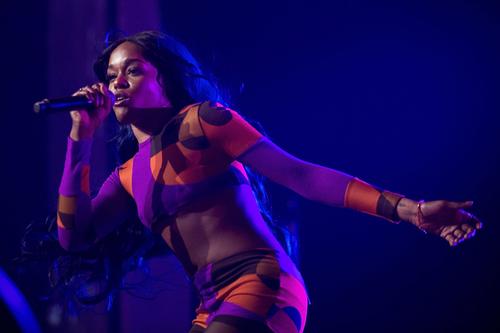 Azealia Banks has been relatively quiet since dropping f her Slay Z mixtape back in 2016, but having shared some random songs sporadically over the last couple years, Azealia Banks is ready for the world to hear her new body work. On Monday, Azealia revealed that her long awaited album, Fantasea II: The Second Wave, will finally be dropping in March sometime.

“Okay guys !! so Fantasea Two the second wave is going to be released @entertainmentone In March 2018,” Azealia explained in the Instagram photo. Unfortunately, she didn’t reveal the exact date or what’s to expect from it, but luckily we’ll only have to wait a few more weeks to find out.

In an interview with XXL last year, Azealia spoke about reworking the project and her decision to change Fantasea II from a mixtape to a full-length album.

“We’re gonna be redoing Slay-Z, just because there are a couple songs on Slay-Z that didn’t really get their chance, and I think that, coupled with some new material, Slay-Z can actually have her moment in time,” she said. “Then after that, it’s Fantasea II, which is gonna be an album instead a mixtape. It’ll be a follow-up to Fantasea. Then after that, it’s Business & Pleasure, which is the proper follow-up to Broke With Expensive Taste.”

We’ll see if Azealia sticks to the plan and we get to hear her new project next month, but we’ll be keep you posted once a concrete release date or tracklist surfaces.

Until then, check out Azealia’s IG posts (below), and revisit her latest single “Icy Colors Change” in the meantime.