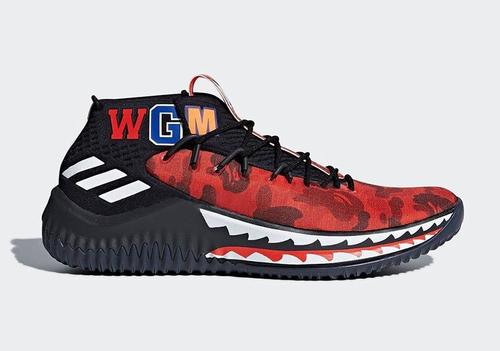 Bape is teaming up with Portland Trail Blazers star Damian Lillard and Adidas to release a couple special edition Dame 4s during the NBA’s All-Star Weekend in February.

As it turns out, there are actually three Bape x Adidas Dame 4s in the works, but only two them will be available to the public.

The third pair, which was revealed today courtesy @YeezyMafia, will be a “Family & Friends” release.

All three the limited edition Dame 4s draw on inspiration from Bape’s unmistakable shark hoodie, highlighted by white shark teeth about the Bounce cushioning and midsole, as well as eyes stationed on the toe the shoe.

Adidas and Dame have yet to confirm these reports, but it appears the drop is expected for mid-February when the NBA’s elite invade Los Angeles for the All-Star festivities.

Check out the exclusive “Friends & Family” pair below and stay tuned for more details.