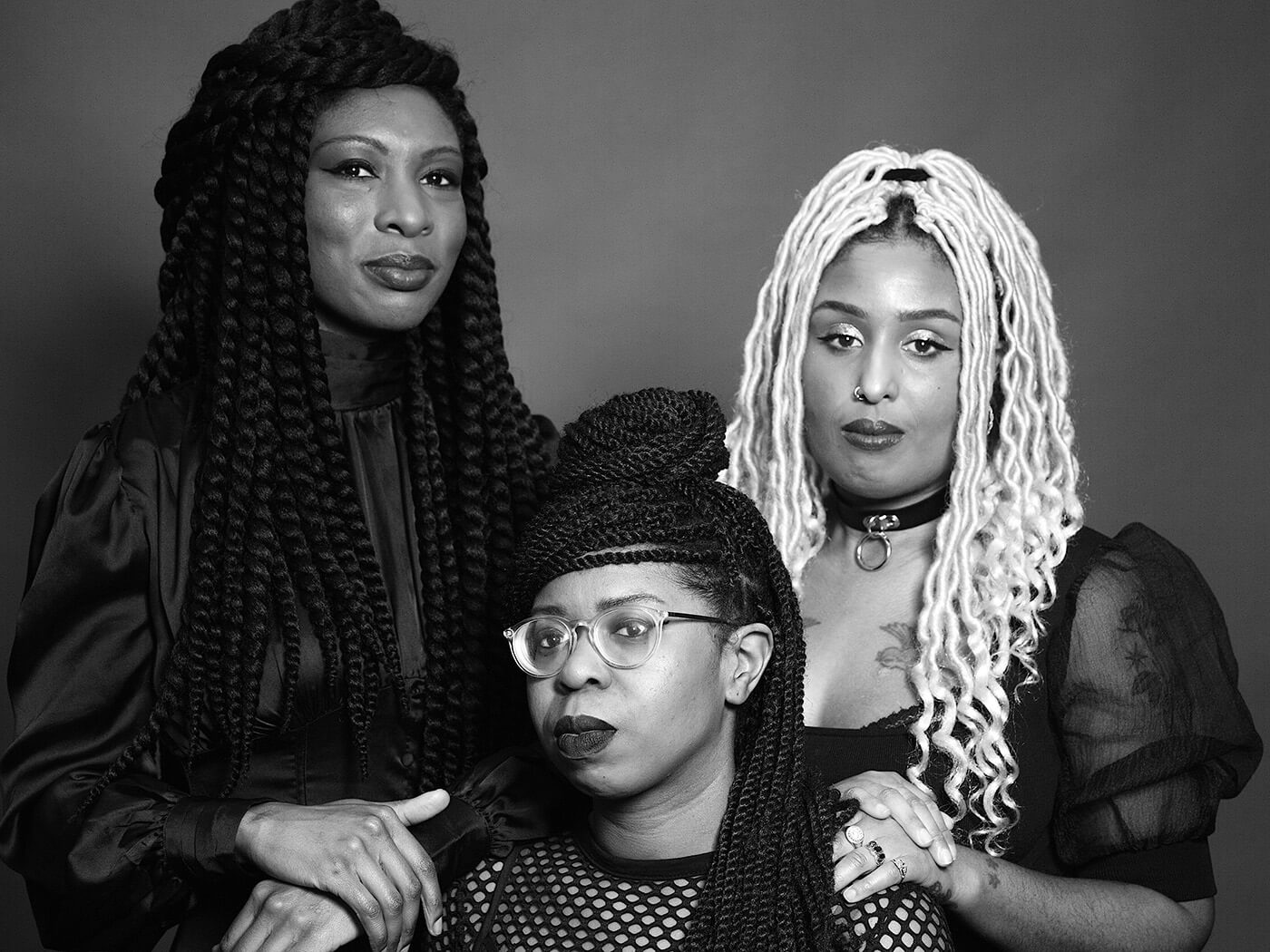 By all rights, Big Joanie shouldn’t have enough spare time to sound as good as they do. Formed in 2013 as the result of a chance encounter – when drummer Chardine Taylor-Stone noticed that guitarist and singer Stephanie Phillips was carrying a Raincoats tote bag – this London trio of committed, creative women have built something truly remarkable over the past nine years, becoming a formidable force in principled DIY music.

Philips, a music writer as well as a musician herself, started the collective DIY Diaspora Punx, which then founded Decolonise Fest, an event by and for DIY musicians of colour that is still thriving. She also wrote a book, Why Solange Matters, for University of Texas Press. Bassist Estella Adeyeri is a member of Girls Rock London, a branch of the Portland, Oregon, organisation set up to help young women and non-binary people get into making their own music. Taylor-Stone has won awards for her LGBT+ activism, and is working on her first book, Sold Out: How Black Feminism Lost Its Soul. They are the sort of band who would send Jacob Rees-Mogg running in terror to Nanny.

Their music walks the walk as much as the rest of what they do: their 2018 debut album, Sistahs, with its slanted, girl-group-flavoured, riot grrrl-laced indie punk, inspired Thurston Moore and Eva Prinz to set up a whole new label, Daydream Library Series, in order to release it. They’ve also put out 7”s on Kill Rock Stars and Third Man, as well as touring with Bikini Kill, appearing at Grace Jones’s Meltdown, and being picked by Sleater-Kinney to contribute towards a Dig Me Out tribute album. Their live shows, in which overt activism and delirious dancing collide delightfully, have won them instant converts from their early days at DIY Space for London to this year’s Glastonbury debut.

But what their second record, Back Home, underlines more than ever is that Big Joanie can’t be encompassed in an elevator pitch or a checking-off of influences. There’s an entrancing breadth of style and mood here, one that proves them keepers indeed. Opener “Cactus Tree” recalls the woozy, haunted indie of Belly and early Throwing Muses in its surreal, mystical imagery, heavy, swirling guitar and ghostly-sweet backing vocals. “He looks like home and I feel saved”, sings Phillips, the first of many references to homecomings on the album, whose title reflects on what “home” means for people with more than one heritage. The cover art is a tapestry, by artist Angelica Ellis, depicting Taylor-Stones’ nephew on a barber’s chair, made in a style evoking the wall hangings frequently seen in British-Caribbean living rooms after Windrush. “I can’t find you, come back home”, sings Philips on the chiming indie rock of “Today”, while on “Insecure” she boards a train to “ride far away from here… I sit and think of all the things that I could be”.

There’s plenty of demonstration of the things Big Joanie could be here: the gothic guitars and chill Euro synths of the brooding “Your Words”, the chunky, Amps-esque grunge-pop punch of “Taut”, the sweetly fuzzy Omnichord and charmingly naive beat of “Count To 10”. “Confident Man” exults in deliciously fat synth riffs and drum-machine handclaps, while “Happier Still”, inspired by Nirvana, hammers home the fake-it-’til-you-make-it aspect of grinding through depressive episodes with a brutal, bouncy grunge attack. “I Will” evolves from a deliciously languorous mood – muted organ and ghostly reverb softening the edge of Phillips’s promise: “If I could write the book on us/I’d tell the truth of what has passed”, to a Mellotron-laced psychy jam.

Perhaps the most irresistible hook on Back Home is “In My Arms”, a peppy rock’n’roll love song that plays to the yearning power of Phillips’ voice, with a finger-clicking sunny warmth and a lovely outro of chiming and intertwining vocals; it returns towards the close of the record in a stripped-back, Shangri-La’s like reprise. But probably the most impressive track is closer “Sainted”, whose thrummingly motorik synth-iced gothic flounces recall the best of big-coated ’80s post-punk. Amid all these stylistic wanderings, though, Big Joanie never forget to keep faith with their core sound – that raw punk heart and touch of girl-group sugar – with the result that Back Home is a cohesive, strong statement as well as an exciting one. This is a band at home with who they are, exploring who else they could be with thrilling verve.