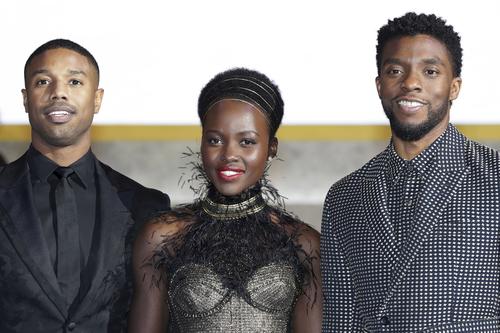 Black Panther's Second Weekend Is Second-Best Ever With $108 Million

Black Panther has put up some big numbers in its second weekend at the box fice. According to Deadline, the film has earned $108 million this weekend, as Saturday, and stands to earn more today. This puts it behind only Star Wars: The Force Awakens‘ second weekend ($149.2M) in movie history, and bests The Avengers‘ $103M. It is expected to eclipse $400 million in total by the end the day Sunday, which means the film will tie Jurassic World as the second-fastest film to hit the mark (10 days). Again, it falls behind The Force Awakens‘ record 8 days.

The film’s first week was the biggest in Marvel Cinematic Universe history, earning $292 million in North America. This puts it ahead The Avengers, which previously held the record at $270 million. Black Panther opened with a $202 million-dollar weekend.

“It still humbles me to think that people care enough to spend their money and time watching our film,” director Ryan Coogler wrote in a letter addressing fans and moviegoers this week. “To see people all backgrounds wearing clothing that celebrates their heritage, taking pictures next to our posters with their friends and family, and sometimes dancing in the lobbies theaters — ten moved me and my wife to tears.”

The Kendrick Lamar-curated soundtrack for the film debuted at No. 1 on the Billboard 200 last week. In an interview with BBC Radio 1, Kendrick revealed that he’d like to act in the sequel. “I really enjoy Killmonger’s character, just f the simple fact that he was a villain but he came with some real,” he said. “He was a villain but he was loved and misunderstood. So if I could, I’d play a Killmonger for sure.”