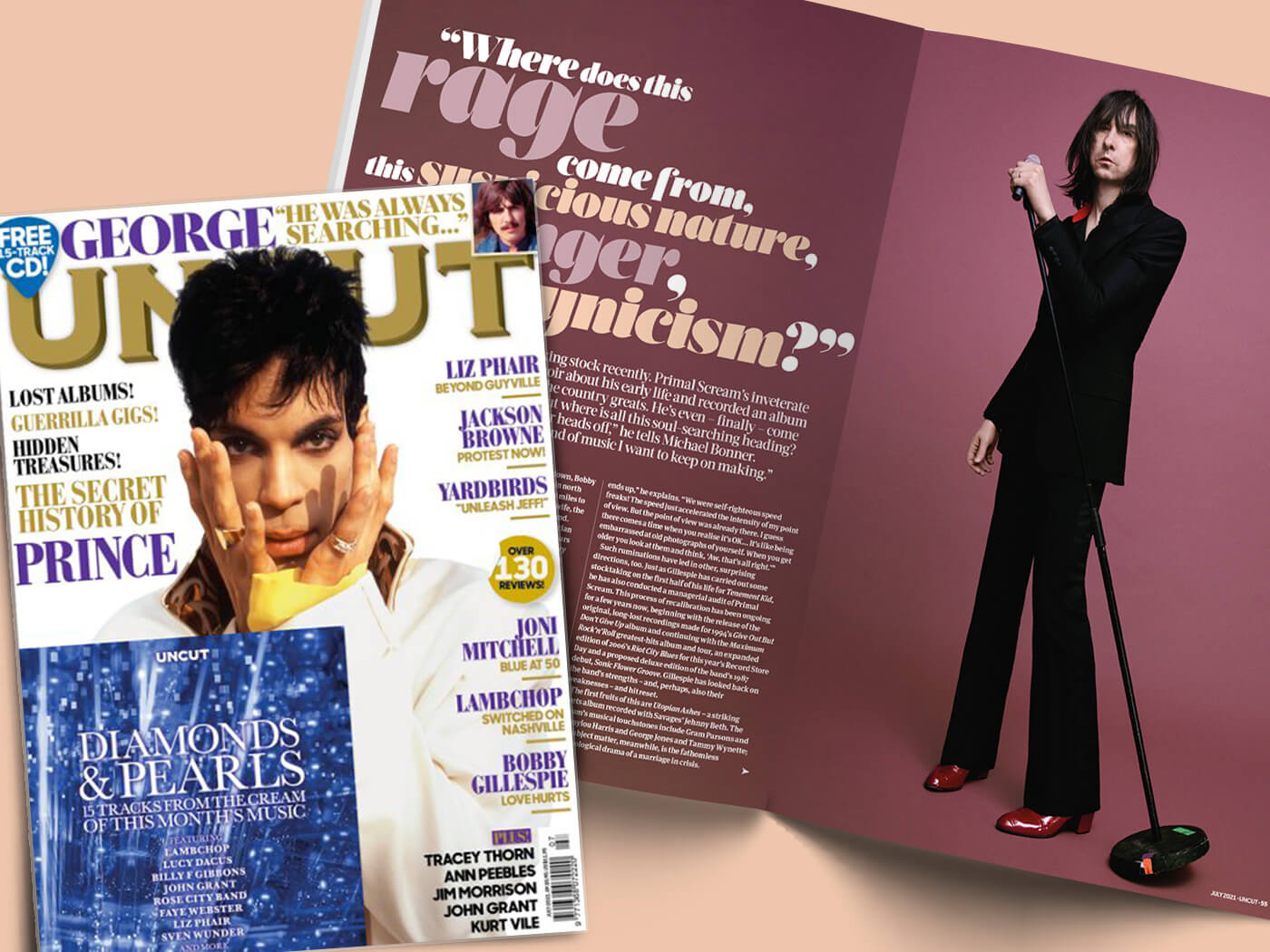 Bobby Gillespie: “Where does this rage come from, this suspicious nature, this anger, this cynicism?”

Bobby Gillespie has been taking stock recently. Primal Scream’s inveterate rabble-rouser has written a memoir about his early life and recorded an album of heartworn duets inspired by the country greats. He’s even – finally – come to terms with his early records. But where is all this soul-searching heading? “People want us to take their heads off,” he tells Uncut in our latest issue, out now. “But I don’t know if that’s the kind of music I want to keep on making.”

Most days during lockdown, Gillespie left his home in north London and walked two miles to the studio owned by his wife, the fashion stylist Katy England. There, he wrote. As a musician who has spent almost 40 years in bands – first as drummer with The Jesus And Mary Chain and then with Primal Scream – these sessions proved to be an unusually solitary, not to say quiet, creative experience. For the most part, Gillespie was working on Tenement Kid – a memoir that follows him from childhood in Glasgow up to the release of the Screamdelica album in 1991.

“I want to give a good account of myself and my life,” Gillespie explains. “I didn’t know what it took to write a book. I’ve just written rock’n’roll songs – three, four or maybe five verses, which is a very condensed, disciplined way of writing. So it’s a different way of expressing myself – which I enjoyed, I have to say.”

Reflection has never been Gillespie’s preferred state. Primal Scream’s career has been characterised by a unique and impressive sense of restlessness – whatever the outcome. “We always wanted to keep ploughing ahead. Sometimes you go sideways, sometimes you sink, but you always want to do the next thing and see where it ends up,” he explains. “We were self-righteous speed freaks! The speed just accelerated the intensity of my point of view. But the point of view was already there. I guess there comes a time when you realise it’s OK… It’s like being embarrassed at old photographs of yourself. When you get older you look at them and think, ‘Aw, that’s all right.’”

Such ruminations have led in other, surprising directions, too. Just as Gillespie has carried out some stocktaking on the first half of his life for Tenement Kid, he has also conducted a managerial audit of Primal Scream. This process of recalibration has been ongoing for a few years now, beginning with the release of the original, long-lost recordings made for 1994’s Give Out But Don’t Give Up album and continuing with the Maximum Rock’n’Roll greatest-hits album and tour, an expanded edition of 2006’s Riot City Blues for this year’s Record Store Day and a proposed deluxe edition of the band’s 1987 debut, Sonic Flower Groove. Gillespie has looked back on the band’s strengths – and, perhaps, also their weaknesses – and hit reset.

The first fruits of this are Utopian Ashes – a striking duets album recorded with Savages’ Jehnny Beth. The album’s musical touchstones include Gram Parsons and Emmylou Harris and George Jones and Tammy Wynette; the subject matter, meanwhile, is the fathomless psychological drama of a marriage in crisis.

“I thought it was a very adult record and it should be presented as an adult record,” says Gillespie. “Maybe people expect a certain thing from Primal Scream and by presenting it in the way that we have they maybe have to consider it differently. If we did a hardcore, electro-punk record then I couldn’t write about these subjects in a tender, humanistic, empathetic way. You know [mimics electronic sound] – it’s too paranoid and claustrophobic. That was me, 20 years ago. I’m a different person now.”

This interrogation of what Primal Scream means in 2021 is at the heart of a wide-ranging conversation that takes in fallen comrades, the recent Alan McGee film and the levelling qualities of Narcotics Anonymous meetings. Meeting on Zoom, Gillespie looks well and happy, sporting the kind of open-neck shirt also favoured by Nick Cave. As with Cave, Gillespie has survived numerous creative shifts and close shaves, arriving now in his late fifties with an artistic career behind him that seems to have developed intuitively. “I’ve got no complaints,” he confirms. “I’ve got my wife, my kids, my dogs, I’m very happy.” A smile spreads across his face. “Who’d have thought?”