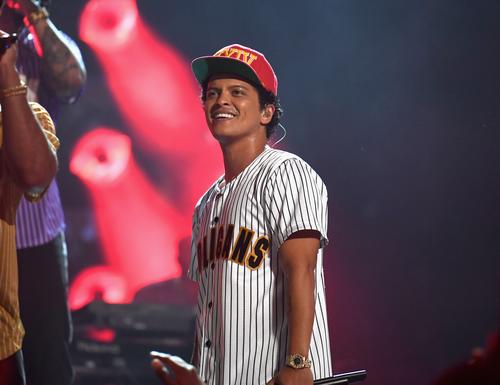 A year and some change since its debut, Bruno Mars’ 24K Magic album has found its way creeping through the Top 10 the Billboard Hot 200 chart once more, thanks to the success its newest single.

Pushing 37,000 more units, it soared from No. 15 to No. 4 on the charts following the release the remix to one the effort’s cuts “Finesse,” featuring Cardi B. This is the highest the album has been since April when it last sat at No. 4 . The last time it was in the Top 10 was in September , and it saw its peak on the chart at No. 2 at the tail end 2016 in December.

Since its release, 24k Magic has been certified double Platinum in the United States, and has earned Bruno six total nominations at this year’s Grammy ceremonies, including the coveted Album Of the Year category.

Elsewhere on the charts this week, 24K Magic is preceded by the soundtrack for The Greatest Showman, a film starring Hugh Jackman, Zac Efron, and Zendaya sitting at No. 1 for the second consecutive week, followed by Ed Sheeran’s Divide at No. 2, and G-Eazy’s The Beautiful And The Damned at No. 3.