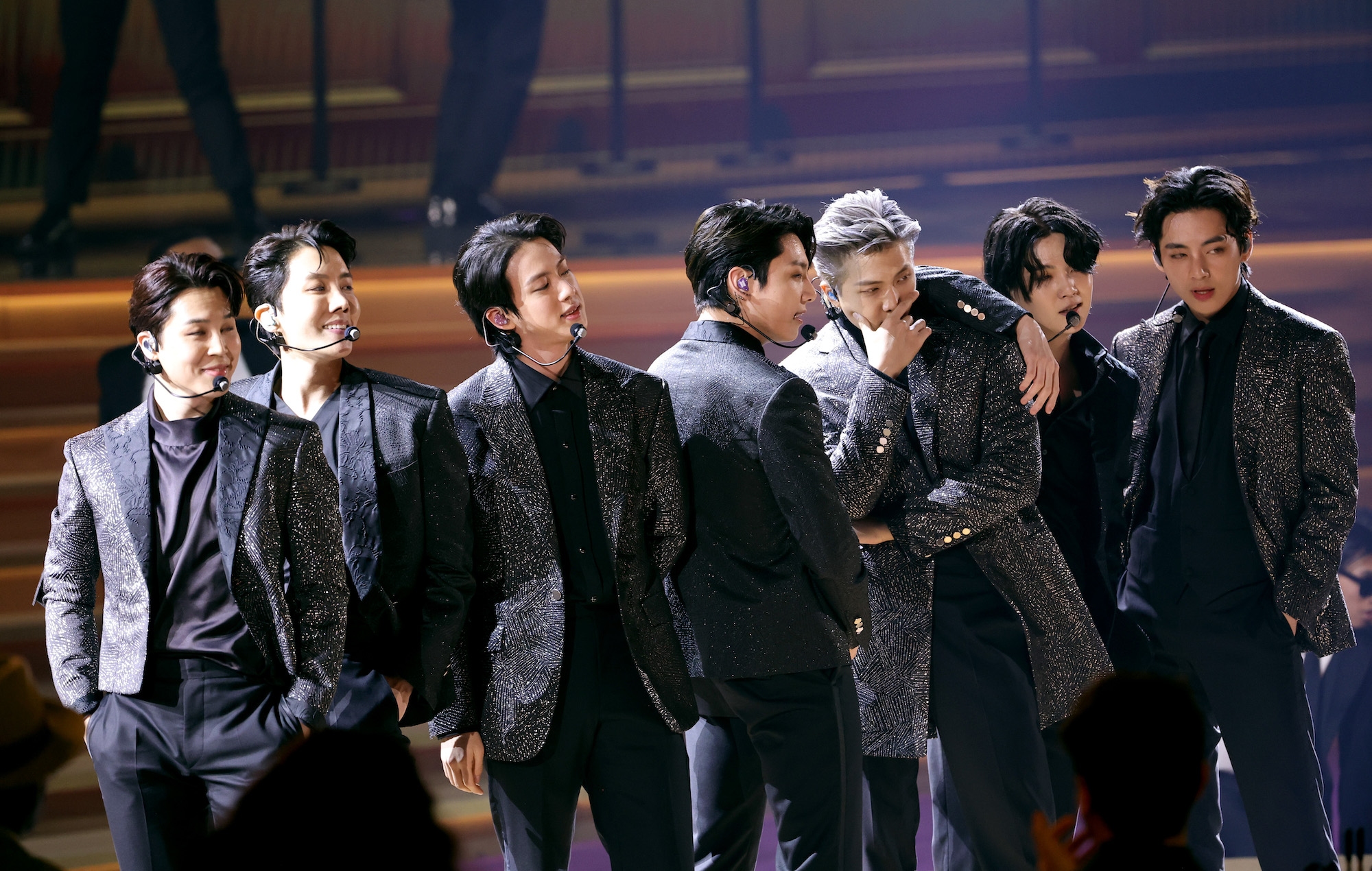 BTS became undercover agents for a stunning performance of their nominated, chart-topping single at the Grammys 2022 tonight (April 3).

Last year, the seven-member record-breakers performed their hit single ‘Dynamite’ remotely from Seoul, while in 2020, they teamed up with Lil Nas X for his performance of ‘Old Town Road’.

BTS’ performance began with singer Jin operating computers that looked straight out of a spy movie, while Jungkook was lifted down onto the stage on a black pole. The other members were shown sitting at various tables in the crowd, with V flashing a mysterious card at Olivia Rodrigo.

When Jungkook hit a button, ‘Butter’ began booming around the arena and the group danced from the tables to the stage, where they performed in an art gallery setting.

Midway through the performance, security lasers shot across the stage and BTS danced over, under and in between them in a complex section of choreography. Jin, who had stayed at his part of the set with a black glove covering his injured left hand, joined the rest of the group for the final chorus, along with numerous backing dancers.

When the performance ended, BTS were given a standing ovation, while host Trevor Noah exclaimed: “Are you kidding me, what was that?! BTS, everybody!”

The group are nominated for Best Pop Duo/Group Performance for ‘Butter’ at this year’s Grammys and are up against Tony Bennett and Lady Gaga, Doja Cat and SZA, Justin Bieber and Benny Blanco, and their ‘My Universe’ collaborators Coldplay. The British band’s frontman Chris Martin recently said he was rooting for BTS to win the category, despite Coldplay’s nomination.

If BTS do win the award it will be their first Grammy win and they will make history as the first Korean pop act to be victorious in the awards show’s history.

The Grammys 2022 is taking place at the MGM Grand in Las Vegas tonight, after the show was postponed from its planned January event due to the continuing COVID-19 pandemic. Other performers set to appear tonight include Lady Gaga, Olivia Rodrigo, Billie Eilish, H.E.R., Lil Nas X and Jack Harlow, Nas, Justin Bieber, and more. Silk Sonic opened the show with a performance of ‘777’.

Foo Fighters were also scheduled to perform at the ceremony, but cancelled their appearance after the death of their drummer Taylor Hawkins last week (March 25). The band have won three Grammys so far today, including Best Rock Album for ‘Medicine At Midnight’.

Other early winners include Kanye West for Best Melodic Rap Performance for ‘Hurricane’ and Best Rap Song for ‘Jail’, Tyler, The Creator for Best Rap Album for ‘Call Me If You Get Lost’, and Olivia Rodrigo for Best Pop Solo Performance for ‘Drivers License’. You can keep up with all of the winners from the main ceremony as they happen here.