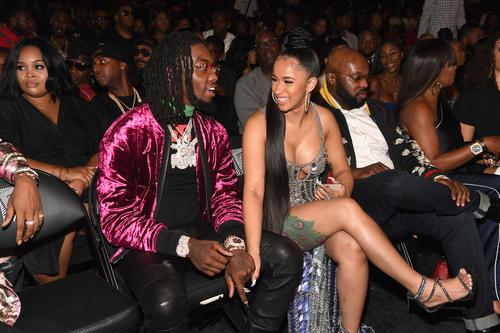 Cardi B has managed to captivate most America with her polarizing personality & hit music over the past year or so, and it’s hilarious videos like this that make fans fall in love with her. For Valentine’s Day, her fiancé Offset decided to gift with her an icy new necklace & bracelet, which she reacted to in hilarious fashion.

RELATED: Cardi B Rumored To Be Pregnant

The “Bodak Yellow” rapper took to her Instagram page Wednesday night and showed f her new bling, and to say she was excited is an understatement. While literally screaming in the phone, Cardi can be heard thanking “this motherfucker,” bka her fiancé, for the lavish gift, before hilariously adding that if he was present she would be giving him top.

“I wish I was here I would been sucking noise] nom nom nom…., sucking & suckin’ & suckin’,” she hilariously said while admitting she was going to give him something “way less than this, but now I gotta up it up” lol.

Shortly after that, Cardi threw on the bling, and showed it f on her body, while her verse on the newly released “Ahora Dice” remix plays in the background.

RELATED: Cardi B Previews Her Next Potential Hit On Instagram