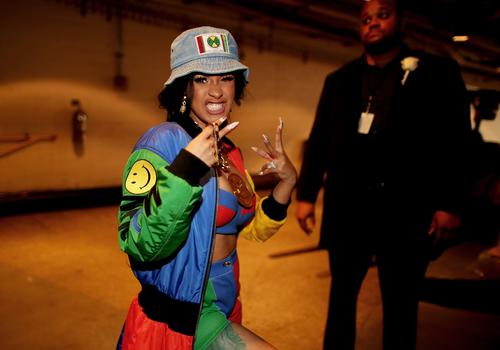 Cardi B is an interesting figure in the rap world. The strength one song propelled her from Love & Hip Hop figure to a superstar in her own right. Since the release “Bodak Yellow,” she’s been dropping some dope guest verses and dropped only one other song with “Bartier Cardi.” While she’s undoubtedly one the hottest figures in music right now, many are waiting for her to drop her debut album in order to gauge whether she’s just a commodity or she’ll actually be in the game for longer.

Earlier today, Cardi B hit the ‘Gram with a post and delete a snippet new music. In the since-deleted Instagram post, she said that she was debating whether she was going to put this record on her debut album. From the snippet the record, it does sound hard. She comes through with some dope bars and from the sounds the production, it sounds like a fire beat as well. Hopefully if it doesn’t end up on the album, she ends up releasing it as a loose single down the line.

In addition to the new music she previewed, Cardi got a lot more going on for her. Earlier today, Bruno Mars revealed the tour dates for the 24K Magic Tour which Cardi will be opening up on. On top that, she’ll be featured on Jennifer Lopez’ new single “Dinero.”

Overall, Cardi B’s keeping busy and with her debut album on the way, we’re bound to get more bangers from the Bronx rapper.

Peep the clip below and follow @hnhh.music on Instagram for updates on new music from your favorite artists.