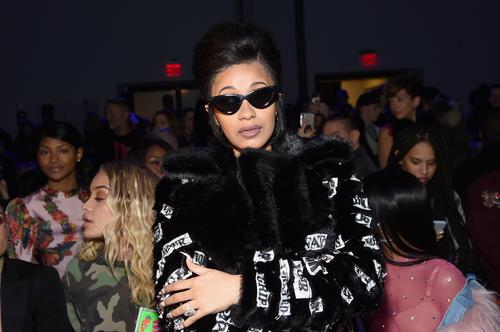 Cardi B Rumored To Be Pregnant

RELATED: Cardi B Previews Her Next Potential Hit On Instagram

So apparently there were two VIP areas at the Maxim party, one at the side the stage that was reserved for talent and football players, and the other in the back the venue which was reserved specifically for Cardi and her entourage.

Sources say that after Cardi took the stage, an employee at the venue asked her camp if they could escort Cardi back to her VIP area, where the party was at & the alcohol was flowing. However that’s when one Cardi’s reps said she didn’t want to be in a “party atmosphere” and would rather stay in the area by the stage and drink Fiji water. The rep then told the staffer that Cardi was 3 to 4 months pregnant.

This report comes just a week after more the same rumors first surfaced, and Cardi even denied her being pregnant. “No bitch I’m just getting fat. Let me fat in peace,” Cardi B responded to a fan asking… “Is there maybe a Kylie Jenner secret that we need to know about lol Just asking.”

While the report seems to be a bit gossipy, it did come from , who usually has reliable sources. Plus with people pointing out her possible weight gain recently & Offset presumably shooting the club up with all their success & engagement, the possibility this being true is pretty high. It definitely wouldn’t surprise me either, however I’m lowkey questioning this “source” from the venue if you ask me.

We’ll keep you posted if Cardi responds to these rumors or makes an announcement.