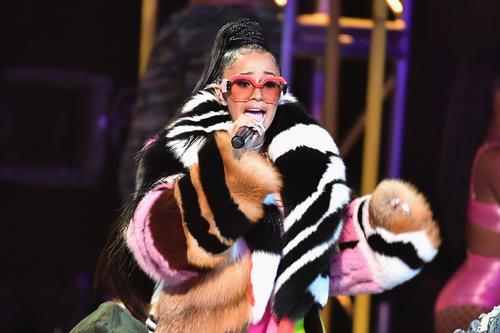 Cardi B Ties Record Set By The Beatles, Ashanti For Simultaneous Top 10 Singles

When 2017 first kicked f, it was hard to believe that Cardi B would be tying records set by Ashanti, or in an even wilder turn, The Beatles. Yet lo and behold, the “Bartier Cardi” rapper has proven herself as one rap’s most unstoppable recent acts. Though many doubters were quick to write her f after the success “Bodak Yellow,” she’s currently enjoying the taste all their bitter tears as she continues to shatter records. Today, Cardi has been celebrating her latest milestone, which puts her in the history books alongside Ashanti and the legendary Beatles.

Thie week, Cardi became ficially the first rapper, and one three acts to have three singles in the Hot 100’s top ten at the same time, with “Bodak Yellow” at ten, Migos’ “Motosport” at seven, and G-Eazy’s “No Limit” at four. Cardi celebrated her accomplishment with a couple ecstatic videos,  jolly stating “I know we all God’s children, but I think he love me the most. But y’all special too!”

She also posted a second video, in which she addressed “La Modelo” making the Hot 100 as well. Holding it down from her grandmother’s house, Cardi thanks “everybody who don’t even speak Spanish for supporting the song,” as well as the Latino community for holding her down. Perhaps we’re looking at the next “Despacito.” Suffice it to say, Cardi B has proven herself as a mainstay in the game, and anticipation for her upcoming album is growing by the day. While a 2018 release is to be expected, we’ll keep you posted as soon as any new details drop.