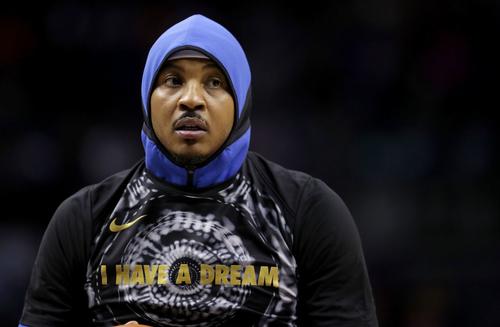 Carmelo On Russell Westbrook's Ejection: "I'm Done With The Refs"

Carmelo Anthony has reached a breaking point with NBA ficials.

After OKC’s 95-88 victory over the Sacramento Kings last night, Melo was asked about the ficiating and he made his point quite clear, “I’m done with them.” Anthony’s displeasure with the refs stems from Russell Westbrook’s ejection which occurred with just under three minutes to play in last night’s game.

Westbrook was hit in the face by De’Aaron Fox while going in for a layup and then collided with Willie Cauley-Stein. He came back down with the ball and then fell to the floor as referee Matt Boland whistled him for traveling. The reigning MVP immediately argued the call which resulted in two quick T’s and an early exit.

At the time he was tossed, Westbrook was just one assist shy another triple-double, finishing with 19 points, 16 rebounds and nine assists. He left the arena without speaking to the media, but Carmelo Anthony had this to say regarding the refs as a whole.

Anthony’s latest comments come roughly one week after he opened up about how the relationship between players and ficials has changed since he entered the league.

“The game has changed a lot since I came in 15 years ago — the players and the ficials had that dialogue, whether it was good or whether it was bad, there was always a point where they would let you get a little steam f, and then would come to you and say that’s enough, let’s move on,” Anthony said last week. “And now, the trigger is too quick. You look at somebody wrong, you get a technical foul. You say one wrong thing, you get a technical foul. So I think that’s the difference from when I came in — the dialogue and communication and the relationship the players and ficials had] when I first came in and from now is a lot different.”