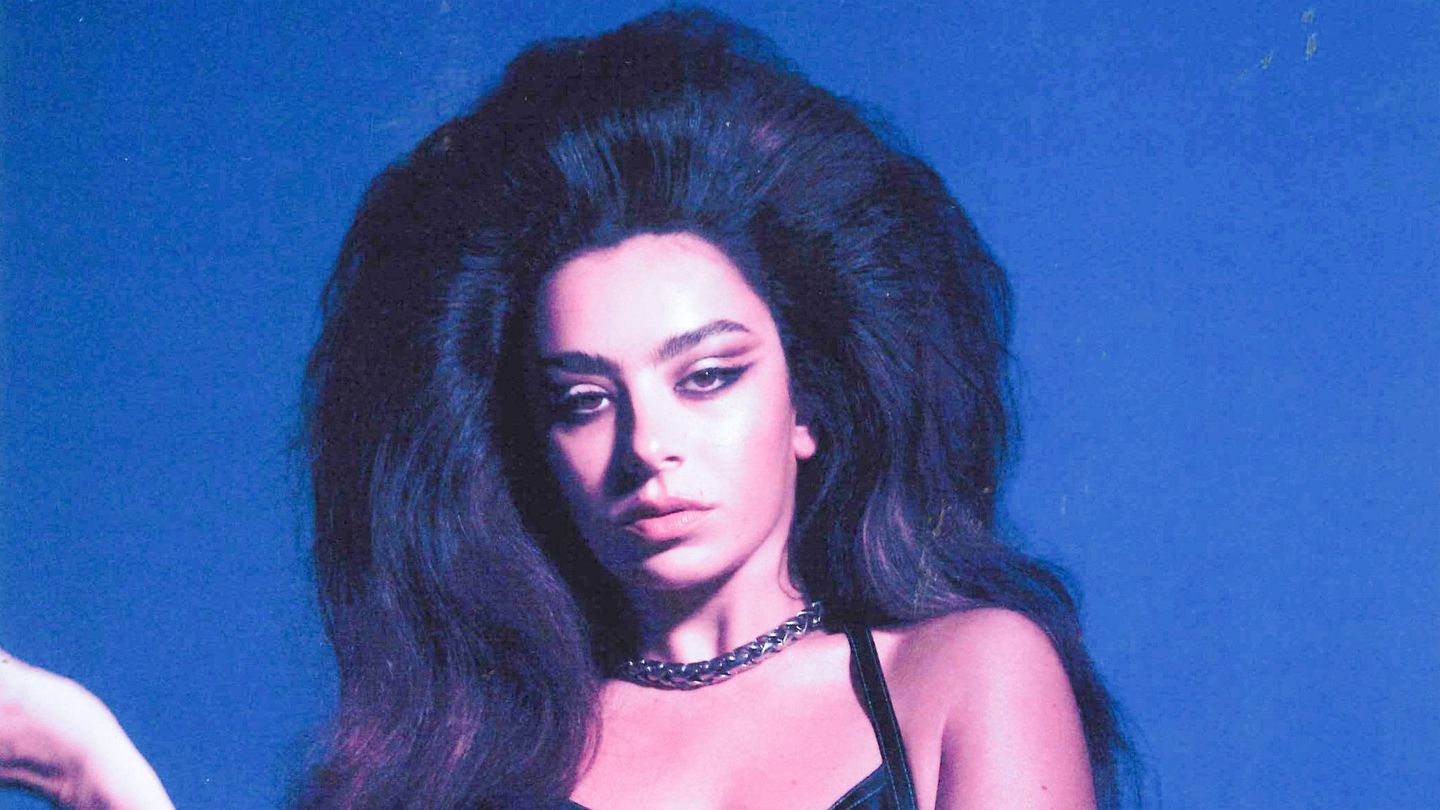 Sashaying into the MTV studio after an afternoon at 30 Rock preparing for her recent Saturday Night Live performance, Charli XCX takes the room by storm. In a black sleeveless dress, with her hair curled and down, and the most incredible set of nails adorned with fake pearls that match her rhinestone-dotted eye makeup, she is the definition of star power.

For almost a decade, the artist born Charlotte Emma Aitchison has stood on the precipice of superstardom. She co-wrote two tracks that quickly became part of the pop lexicon and dominated in the early 2010s — Icona Pop’s “I Love It” and Iggy Azalea’s “Fancy” — and with the world at her feet after her first two albums, 2013’s True Romance and 2014’s Sucker, Charli took a step back. She struck out on her own, partnering with English producer A.G. Cook to create songs in a new, no-holds-barred style known as hyperpop. Taking risks, even when calculated in the music industry, can have dire consequences, but Charli jumped in headfirst. Now, with Crash, her third album released since 2019, she’s back and ready to assume the pop throne.

“I wish I could say the decision I made was, like, completely planned out and confident, and I knew exactly what I was doing, but I didn’t,” Charli tells MTV News. “I was just doing what felt right to me at that moment. There was no real thought that I would become a part of a group of artists who together made such a kind of influential sound as a collective of artists.”

Charli’s determination to create a dynamic and individual sound worked out in her favor as she gained notoriety for experimental 2017 mixtape Pop 2. Her single with the late Sophie, “Vroom Vroom,” became an instant club banger and made Charli one of the dance-floor divas. Such early work was the blueprint for not only hyperpop as a developing genre, but for the artist’s own evolution.

This new album, the final release of Charli’s contract with Atlantic Records, takes the main stage as an over-the-top pop album. From the album art, which finds her slightly bloody in a bikini on the hood of a car, to the glossier production, Crash is a certified powerhouse.

Always the outlier, Charli is no stranger to the cinema, naming her first record True Romance after Tony Scott’s 1993 film of the same name. However, Crash’s album title is less about the ‘96 David Cronenberg thriller and more inspired by the very act of collision. “I’ve always been very fascinated and very drawn toward cars in pop music and lyrics in videos,” Charli says. “I guess it’s just this fast, like, crash-and-burn type of life that I feel like is very reflective of the way that I have kind of navigated my career.”

“I crashed my car into the bridge,” she sang with Icona Pop. “I don’t care. I love it.”

Maybe it’s the years of artistic growth or the time spent in the public eye. The album title and cover art display Charli’s change from a chaotic agent into the behemoth of creative confidence. “I like the danger and the title. I like the potential for it to feel self-destructive,” she says. ”But also, on the cover, I am the immovable object that’s being crashed into, so I think it also shows strength. I just think it’s a great word.”

“Immovable object” is spoken like a mantra. Charli uses the phrase a few times, almost as if meditating on it as we continue talking.

Crash’s history intertwines with her 2020 album How I’m Feeling Now, which Charli wrote and released in six weeks during the early months of the COVID-19 lockdowns. Some of Crash’s 12 songs were written even before that record’s release. With such a long recording period, Charli says, “I really wanted to make it in this way that I deemed as kind of classically major-label, with a lot of different collaborators who work in a lot of different spheres of pop music.” Some of those collaborators include Rina Sawayama, Christine and the Queens, and Caroline Polachek, as well as Cook on the production side.

With an extensive list of collaborators, this project proves to be her most ambitious project yet, including the accompanying music videos that offer a glimpse at a new side of Charli. Featuring modern dance-inspired choreography, Charli frolics on her grave in the video for “Good Ones” and is buried alive, creating a gripping metaphor for career suicide, death, and rebirth into a new era. There is an underlying idea in that track about stepping into power and self-ownership.

“That was definitely a kind of theme for me for the entire album,” she says. ”Power and the idea of power balance, especially within the music industry, like taking the power back. But then also questioning how much you’re really taking the power back if you’re playing into an archetype of what a woman is supposed to be in pop music, and not really like presenting answers to that question, but more just like leaving it out there for people to interpret.”

“A lot of the music on this is extremely powerful, whether there’s power in the heightened sexuality and sexualness of the music or whether it’s a power and the volatility and vulnerability in the music,” she continues.

Now more than ever, Charli is taking female pop conventions and casting them in a new shape. The new era includes the liberation gained from dancing and physical movement pulling from Martha Graham, Katherine Dunham, Bob Fosse jazz, and modern technique. While some fans believe the dancing is being forced on her, Charli made it clear that it’s simply a new frontier for her expression.

“It’s really freeing, and I have so much fun doing it. I’m enjoying this new way of creating, and I have such a huge amount of respect for artists who dance, for dancers, for anyone who expresses themselves through movement, because I think it’s really emotional,” she says. “It’s obviously very physical. It can really help you work through your feelings about things. So it’s kind of been like my savior this past year. It’s just allowed me to really  exercise a lot of emotions that I’ve had, so I love it. I would highly recommend it.”

Charli is determined to bring the very best to her live performances through it all. When she performed on SNL, Charli took the stage in her black, two-piece, fringe-adorned costume from the “Baby” music video and showed how passionate she is about bringing movement to her performances. Some might even call it iconic. But would Charli agree? “My definition of iconic is Charli XCX. That’s, like, the best way I can explain it, to be honest,” she says. “And yeah, that’s it, really. Just me.”