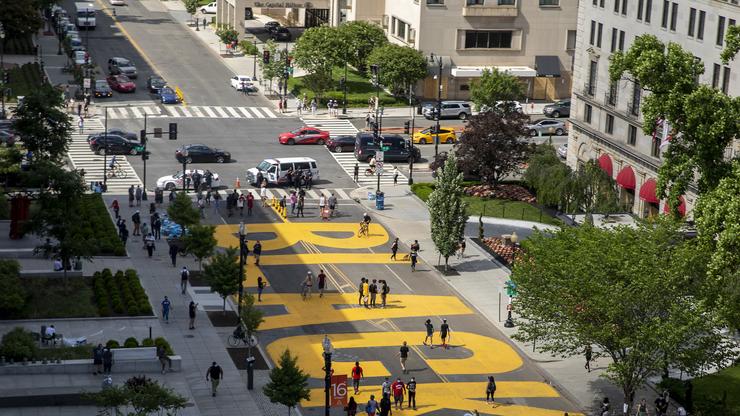 Charlotte, North Carolina artists came together to paint “Black Lives Matter” on a city street, much like the one done in Washington, D.C.

The street leading to the White House not only has “Black Lives Matter” painted in large black letters, but it’s also been renamed “Black Lives Matter Plaza.” While this change was made official by authorities, it looks as if Charlotte, North Carolina is following suit—albeit, symbolically. While protests don’t seem to be as popular as they were last week, American citizens and beyond are still gathering together to fight systematic racism and police brutality. Many community leaders are calling for changes to be made within police departments and for cases to be re-examined by investigators.

ABC News shared footage a Charlotte street where 16 artists joined together to create a street mural dedicated to BLM. “Local artists are creating a Black Lives Matter mural on Tryon Street between Third and Fourth streets in uptown Charlotte,” the outlet reported. The artists collaborated not only with each other but with “the City of Charlotte, Charlotte Is Creative, Brand the Moth, and BLKMRKTCLT,” and each artist has their own letter to work with.

“‘Flower children’ is the inspiration behind Dakotah Aiyanna’s letter ‘L’ of the #BLM street art going down in Uptown #Charlotte. She says it’s because Black people always bloom and grow where they’re planted. Each artist has their own vision for each letter,” reporter Anne Marie Hagerty wrote on Twitter. Check out a few images of the BLM art installation below.