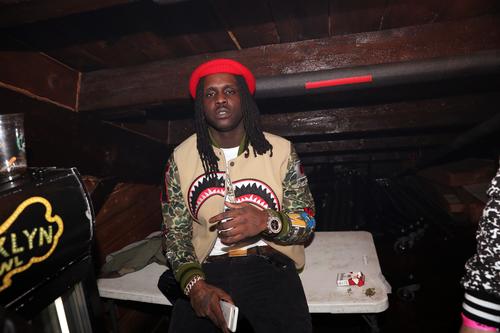 While Chief Keef is typically a quiet person for the most part, that doesn’t mean he’s afraid to speak his mind. The rapper uses social media as a way communicating his thoughts, whether anyone agrees with it or not. Like many other people, Chief Keef isn’t a big fan Donald Trump and he decided to share some thoughts the current president on Instagram yesterday. Today, he decided to send another message to Trump but it has nothing to do with his presidency and more to do with the Secret Service.

In honor Martin Luther King Jr.’s birthday, Chief Keef shared a photoshopped image himself walking alongside Dr. Martin Luther King Jr. at a rally with a sign behind him that read, “G.B.E FUCK TRUMP.” The rapper captioned the photo “Last time I was locked up Donald sent secret service after me!”

Today, the rapper hit his Instagram story to further elaborate on the photo’s caption. “Donald. Don’t send the secret service. K? It’s just a pic. No threat,” he said in the short video.

While it’s kind hilarious, his precautions aren’t unreasonable. Considering what many perceive Chief Keef to represent, a disclaimer to a president who could’ve taken it seriously was probably done out safe measures. And if Chief Keef’s claim that Trump sent secret services after him during his last arrest, he should probably make sure that Trump doesn’t do it again while he’s free.