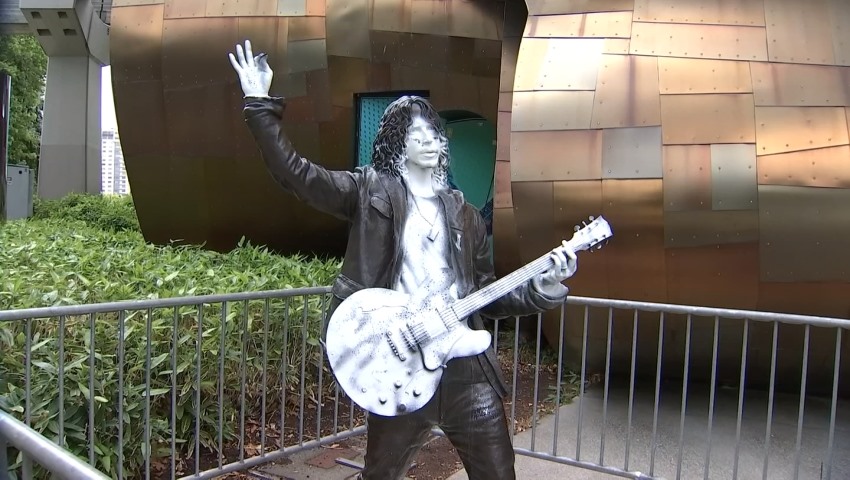 The memorial statue of Chris Cornell in his hometown of Seattle has been vandalised.

As reported by KIRO 7 News, an unknown vandal defaced the bronze statue on Thursday (August 20) by covering it with white paint.

“My children and I are heartbroken to learn of the vandalization of Chris’s statue at the Museum of Pop Culture in Seattle,” she wrote.

“The statue is not only a work of art but a tribute to Chris, his incomparable musical legacy and everything that he stood for. It represents Chris, who is beloved not only in Seattle, but worldwide.”

Vicky continued, expressing her thanks for fans’ support “in the face of this hate and destruction”.

“It lifted our hearts to hear that fans brought supplies and attempted to clean up the heartbreaking vandalism. The statue will be restored. Hate will not win. Chris is Seattle’s Son!”

Cornell’s statue was erected in front of Seattle’s Museum of Pop Culture on October 7, 2017. The Soundgarden and Audioslave frontman died by suicide on May 18, 2017. He was 52 years old.


In May this year, Cornell’s daughter Lily Cornell Silver announced a mental health awareness video interview series entitled Mind Wide Open on Instagram in honour of Cornell’s memory. Guests on the series include “mental health professional, public figures, peers, and others who will share their stories and struggles, as well as provide knowledge and insight”.

“My goal for this project is simple: to help normalize the open discussion of mental health,” Silver wrote on Instagram.

“Now more than ever, people are struggling with mental wellness as well as the collective trauma, stress, loss, and grief triggered by the COVID-19 pandemic. This pandemic highlights how few resources are widely available. I want to create a dedicated space that prioritizes mental and emotional balance and allows for candid, unapologetic discussions.”