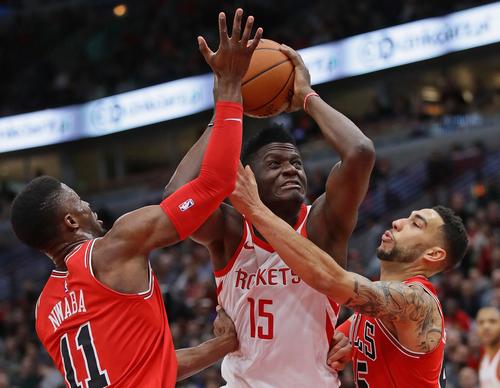 Despite being at the center a controversy this past week, where Houston Rockets players were accused attempting to infiltrate the Los Angeles Clippers’ locker room at Staples Center, Texas’ NBA powerhouse made a big statement to the league on Saturday night, after they dismantled the Golden State Warriors in a big, confidence-boosting win for the team.

RELATED: Harden Says 99% Of Reports From Rockets/Clippers Altercation Were False

James Harden was the difference maker down the stretch, hitting the three-pointer that proved to be the dagger in Houston’s 116-108 win over Golden State. After the game, Rockets center Clint Capela was brimming with confidence and proceeded to give the Warriors some bulletin board material in the form media quotes. Here’s what he had to say, as per Tim MacMahon  ESPN.com:

“We’re confident because we know if we’re doing what we’re supposed to do, we’re going to beat them. We’ve got to keep playing. We know that they’re going to come back if we have the lead, and we’ve just got to keep that mindset. Sometimes I feel like, in the past, we were all dragging down after mistakes. But today, we were ready.

“I think that if we’re doing what we’re supposed to do on defense—all the switches, the weak side—and keep playing our fense by keeping that mentality all game long, we have the weapons to beat them. We are better than them.”

RELATED: Stephen A. Smith: DeAndre Jordan Wants To Be Traded To Rockets

This win against Golden State puts the Rockets just 3.5 games back the Dubs for first place in the Western Conference as the NBA regular season inches towards the trade deadline.