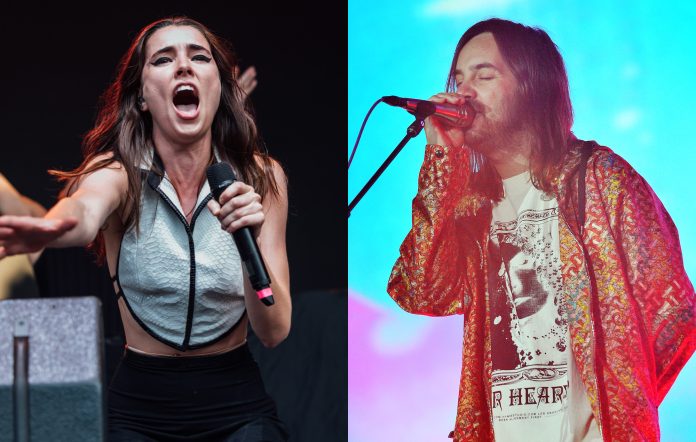 Confidence Man have revealed how their lastest collaboration with Tame Impala came about.

Tame Impala’s frontman Kevin Parker remixed the Brisbane quartet’s track ‘Holiday’ for their recent EP ‘RE-TILT‘, which features remixes of some of their songs from their latest album, ‘TILT’.

Speaking to NME for the latest Big Read, the band said he’d approached them asking to collaborate on Instagram. However, the duo only heard he had messaged them on the grapevine and didn’t fully believe it until they checked the hidden requests section of their Instagram inbox.

“It had been two months and we still hadn’t replied to him,” said co-frontwoman Janet Planet. Fortunately, it didn’t get in the way of them working together.

“We’re old fans being Aussies, coming from that Tame Impala heritage,” added co-frontman Sugar Bones. “It was just weird, we were like, ‘Are you serious, Kev?’”

Elsewhere in the feature, the pair discussed their experience performing at this year’s edition of Glastonbury and how they were able to win over festivalgoers who weren’t so familiar with them.

“You can see a crowd when they’re a bit uneasy at first, which for people who don’t know anything about us is normally what happens. Where they’re just standing still for the first song or two,” said Bones. “But generally we can just break through that stiffness and then all of a sudden everyone gets it, and lets their hair down.”

However, they admitted to struggling to win over the crowd when they were supporting Noel Gallagher in Margate. “I remember Sugar popping champagne on them, and them just putting their raincoats on,” said Planet.

Confidence Man are currently on tour in the UK, having kicked off their fourteen-date UK and Ireland run last week with a three-night residency in London, playing two shows at KOKO and one at the Roundhouse. Tickets are available here. The remaining dates are as follows: