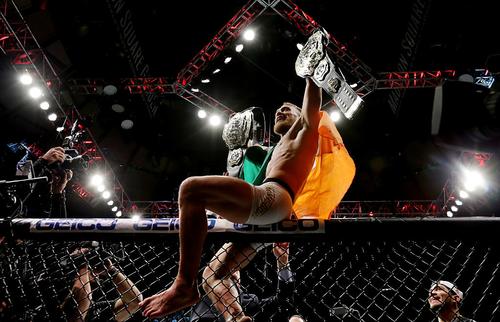 Conor McGregor is in danger losing his UFC lightweight title, according to UFC President Dana White.

During FS1’s UFC Fight Night 124 post show last night, White said that McGregor isn’t planning on returning to the octagon until September and if that’s the case, White is prepared to strip him his title.

McGregor hasn’t fought in the UFC since he knocked out Eddie Alvarez to win the UFC lightweight championship at UFC 205 in November 2016.

If he continues to watch from the sidelines, White envisions interim titleholder Tony Ferguson and Khabib Nurmagomedov going head-to-head for the undisputed championship at one the upcoming UFC PPVs.

“If (McGregor) comes back in September, that’s almost two years (since his last MMA fight). That can’t happen. It’s not fair to everybody else,” White said. “Love Conor, respect Conor, love everything that he’s done for this company. Everybody knows that. I say it all the time. (But) the belt would have to move on. You do Khabib vs. Tony; we’re working on that fight now. If and when Conor comes back, he would get the first crack at the title.”

“I want Conor to start training again and come back and defend his title. … We haven’t committed to a time yet, but as long as Conor wants to fight still, Conor and I always get it done,” White said. “You know how Conor is. Conor wants to do things on his time and when he wants to do it. That’s fine. I always say I respect the kid so much for what he accomplished and what he’s brought, but if he’s not ready to go – the belt, I think he wants to come back in September. That’ll be almost two years, and that’s just not fair to the rest the guys in the division. Let these guys fights, and when Conor decides to come back, and if he decides to come back, then he would get the first crack at the title.”

According to MMA Junkie, Ferguson vs. Nurmagomedov could happen as early as UFC 222 on March 3rd at T-Mobile Arena in Las Vegas or UFC 223 which is planned for April 7th at Barclays Center in Brooklyn.

McGregor has not publicly announced when he’ll be making his return to the UFC but he has ramped up the MMA training posts on IG which might suggest his comeback isn’t that far f.