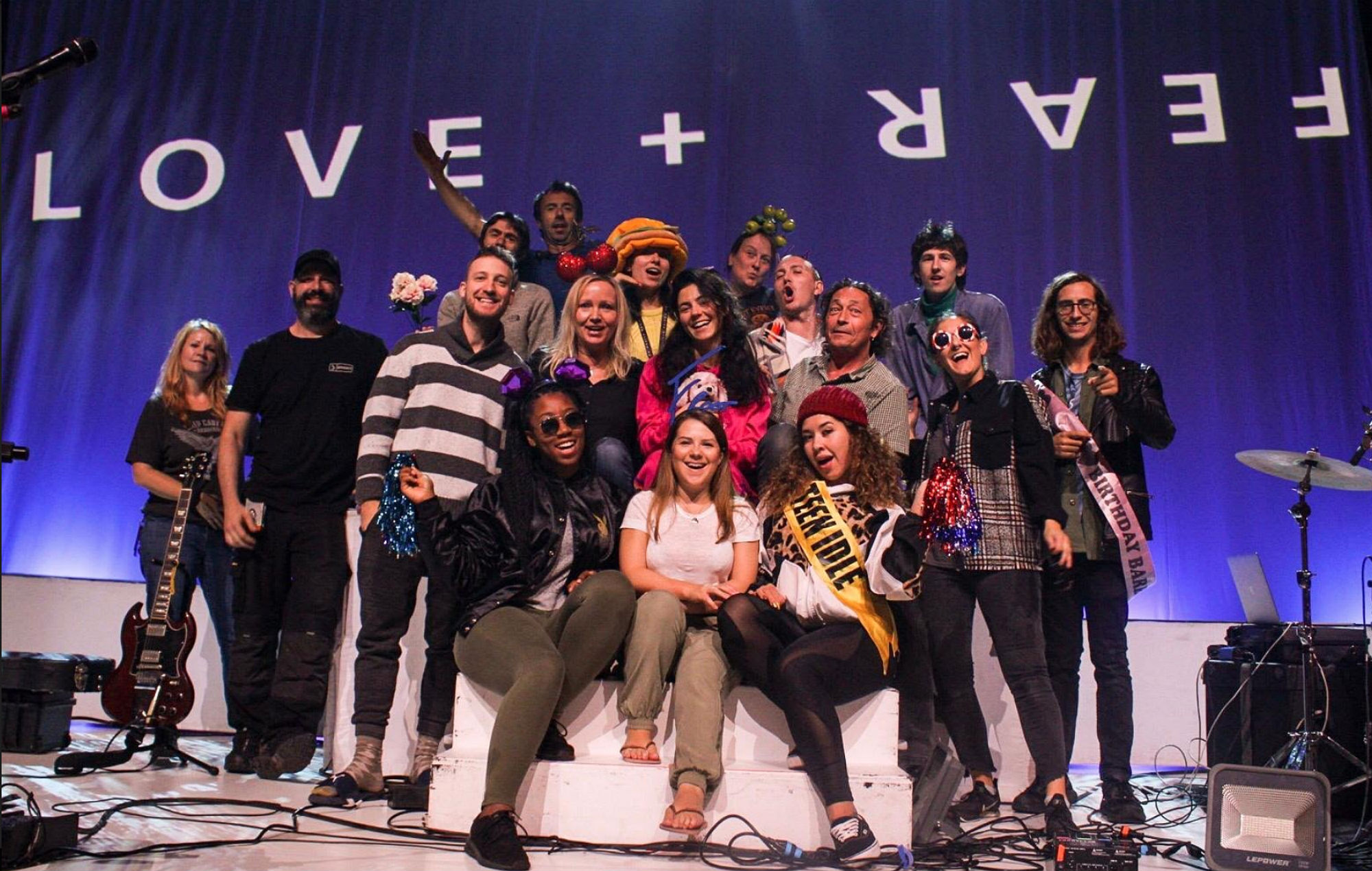 Crew members call on government to save future of live music industry: “You wouldn’t re-open a hospital without doctors”

Live music crew members from across the UK have spoken to NME about their call for the government to urgently provide support to their industry while unable to work due to COVID-19 restrictions.

Earlier this month, the #LetTheMusicPlay campaign saw artists and industry figures take to social media to demand that the government share arts funding to protect the future live crew, musicians and the individuals working behind the scenes.

Despite the government’s recent £1.57billion to help the arts, culture and heritage industries survive the impact of closures brought on by coronavirus, it has been said that this funding hasn’t been reaching those who are out of work within the live music industry – with 60 per cent of jobs expected to be lost from this sector.

Many of these workers are freelancers, have set up their own limited companies and, fear the furlough tap being turned off soon or have found funding difficult or impossible to access.

This week also saw the launch of the #WeMakeEvents Red Alert campaign – with hundreds of crew members marching on the streets of Manchester before arts spaces across the country lit up red in solidarity. Now more people have shared their fears of what’s in store for live music if ancillary workers aren’t supported.

Andy Lenthall is the general manager of the Production Services Association, who told NME that the workers he represents are at risk of abandoning the music industry forever unless furlough is extended as part of a wider tailor-made support package.

“We know that furlough is ending in October,” he said. “We’ve already seen mass redundancies across our sector. For self-employment income support, the last grant will be paid this month and that’s it. We’re looking at that gap between October and March until everyone’s back at work. During that period, we estimate the loss of earning will be somewhere between £60-70million. That’s a gap that we can’t plug, so we need the government to.”

Despite socially distanced indoor gigs being allowed in the UK from tomorrow (Saturday August 15), it is argued that the vast majority of venues will not be viably able to host events with restrictions in place.

“We’re going to have to raise money to literally keep the roof over some people’s heads – then we’ll actually be able to put on live events when we’re allowed to,” he continued. “A lot of other people are retraining in other fields. It’s not all about supporting people because they don’t have any money, it’s actually supporting a workforce so that they’re here to provide us with a live music industry when it can return – otherwise it just won’t happen. You can’t sustain gigs without people. Happy busking everybody.”

Lenthall argued that with the live music industry generating £1.1billion in 2019, they’d be able to pay the money back to the government in tax within a year.

“Without help, we’ll lose our workforce and supply chain really rapidly,” he added. “We’re on a life support machine. They’re going to switch it off. How long will we last after that?”

Jack Chapman, 29, has worked at The Leadmill in Sheffield for six years as part of the changeover crew for loading gear in and out before and after gigs for local acts and established artists.

“I’ve never seen anything like this,” he told NME. “It’s really affected a lot of my crewmates. This is like a family to me. Now they’re going to have to make some tough choices about whether or not they continue. There’s so much uncertainty heading even as far as into next year.

“I know a few folks from other Sheffield venues who were freelancing or on zero hour contracts who don’t know what’s coming so are willing to do just about anything. There are skilled people who just might not come back.”

Asked what this could mean for the local scene, Chapman replied: “There’s a steady stream of music coming out of Sheffield, and there’s a real fear that it will get cut off if this continues. If the 18 to 19-year-olds start to consider other careers than the music industry due to the instability, then we lose out – and we won’t see the effects of that for a few years. That’s if the venues haven’t completely shut down.”

Meanwhile, Jac Nott, 47, a self-employed monitor engineer from Southampton who has worked with the likes of Marina And The Diamonds, KT Tunstall, The Pogues, The Levellers and Gary Numan, described the government’s support for the industry so far as “embarrassing”.

“A lot of newspapers are clapping back with, ‘Oh, they’ve given you £1.57billion’, but that’s not the case,” she told NME. “Some jewels in the crown of venues have got that, but it hasn’t filtered down to the supply chain. As someone said on a poster at the Manchester march the other day, you wouldn’t consider keeping hospitals open without doctors – so what’s the point in keeping venues open without people to keep them running?”

She continued: “I’m really pleased that grassroots music venues have got a look-in for the first time, but as a whole the support is inaccessible. The furlough scheme for people on PAYE is useful, but how can you expect a company to pay towards it from this month if they’ve not earned a penny since March? We’re on our arse with no prospect of a future.”

Mark Wynn-Edwards, 43 from Beverley in East Yorkshire, is a lighting and show designer who has toured with Simple Minds, Doves, Grace Jones, Rod Stewart, InFlames, Paloma Faith and many more. He argued that the government shouldn’t underestimate the amount of talent at risk of being lost.

“Gigs and festivals will happen eventually one way or another, but the question is at what level of quality?” he said. “The UK live music industry is the best in the world – we invented it. Any huge show anywhere has at least one Brit on their crew.

“When people think of a backstage crew, they think of your typical roadie with a ripped jean jacket, but in reality they’re some of the greatest professionals you will ever meet who will run rings around professionals from other industries. There are a lot of people struggling to stay alive who have gone to get a job at Tesco and are saying they’ll stay there because it feels safe.”

He added: “The government needs to extend furlough for the industry, keep the self-employed scheme going and provide grants rather than loans to help companies keep things alive. Nothing is going to happen to February 2021 at the earliest. I know a lot of people in financial trouble who will be lucky to see the end of this month, let alone October.”

Liam Halpin, 41, is an award-winning sound system engineer from Lincolnshire, who has worked with Led Zeppelin, Lou Reed and Neil Young over the last 23 years, with his main recent clients from recent years including System Of A Down and Sam Smith. He was on tour with Tool in the US with a 60-strong crew when the pandemic started to see shows cancelled.

“This is the first time in a very, very long time when I haven’t known when I’m next going to be working,” he said. I’m one of the luckier ones because I’ve been doing this for a while and have reserves to fall back on, but there are a lot of people who don’t and are working invoice to invoice.”

Speaking of the very specific needs of the live music sector, Halpin hit out at the “one-size-fits all” approach of the government’s support.

“We were the first industry to shut down and we will be the last to start back up again,” he said. “December to February is usually quiet but then the Spring tours start up after that before the busy festival season starts. That’s where the money is made until the next quiet period. The timing on this couldn’t have been worse for us as an industry. With the generic wind down of furlough, most of the larger touring companies have announced that they’ll be making a minimum of 25% of their workforce redundant.”

He added: “The biggest thing that we need is recognition that the music and events industry makes a difference financially. We don’t get government support and we hide in the shadows. We’re technicians. If you see us on stage, it’s because something has gone wrong. We are supposed to be invisible. There are people who work their nuts off to provide the entertainment and escape for people in normal jobs, and now we’re being told that we can’t go to work. All we’re asking is to keep us going until we can do what we do.”

Rick Smith, 54 from London, is a tour and production manager for Rule Out Loud, who worked on one of the earliest Lollapalooza tours in the US before going on to tour with the likes of Red Hot Chili Peppers, Eminem, REM, Kasabian, and The Kooks. Were it not for the pandemic, he’d currently be on tour with Underworld.

“Since February, I’ve lost a European tour, an American tour, and an extremely busy festival season,” he told NME. “I’ve had no real income since March and I’d say 97 per cent of the people that I work with are in the same boat.”

Instead of touring, he’s been part of a group meeting with the government to discuss returning to gigs without social distancing, and what’s needed in the meantime.

“There was talk of shows commencing in the autumn, but as long as social distancing is a factor the economics make it totally unviable for anyone to make any kind of money and support the industry,” he said. “Social distancing kills the vibe and it kills the economics. It’s fine for the Royal Opera House and a lot of the old school, theatrical places who are fishing in the same pond for the chancellor’s £1.57billion. That’s going across all the arts and you do get the impression that the needy from our end of the spectrum are not deemed to be as worthy because we’re not as high art.

He added: “A lot of crew are self-employed, and a good 60 per cent of them are directors of their own limited companies and not eligible for any funding and are struggling. We’ve been advising the DCMS, but I feel like they haven’t been paying attention because they just regard us as a bunch of roadies.”

Responding to the latest campaign, the Department for Digital, Culture, Media and Sport told NME that Arts Council England funding of £160million has been made available to freelancers and individual artists – with over 9000 individuals and organisations benefiting from the Emergency Response Fund. They added that a further £95million of additional support for individuals, including freelancers, has been announced.

“Our £1.57billion support package is the biggest ever one-off cash injection in UK culture to secure the future of the performing arts and live events, protect jobs in the industry and ensure work continues to flow to freelancers,” a DCMS spokesperson told NME. “Throughout this crisis, we have worked with urgency to support the arts and we are committed to delivering this funding quickly and fairly to organisations across the country.”

With full capacity shows unlikely in the coming months, last month saw the organisers of a government pilot socially distanced gig with Frank Turner performing at London’s Clapham Grand acknowledg that the event “did not succeed” in creating a viable blueprint for the return of live music.