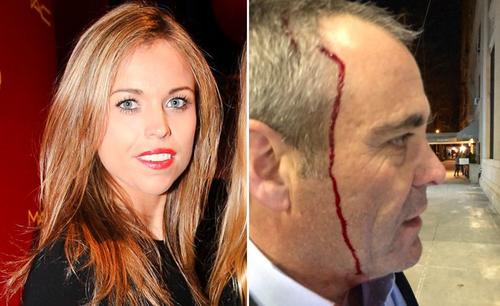 Jacqueline Kent Cooke, the 29-year old daughter former Redskins and Lakers owner, Jack Kent Cooke, was reportedly arrested for felony assault in Manhattan following a New Year’s Eve altercation at Caravaggio restaurant in NYC. Her father owned the Redskins from 1961 to 1997 and also owned the Lakers from ’65 to ’79.

According to the New York Daily News, the millionaire NFL heiress shouted anti-semitic remarks at an elderly woman and then bloodied the woman’s son with her purse outside the restaurant.

Matthew Haberkorn, a 52-year old lawyer, told the NY Daily News that he and his family were waiting at the coat check when Jacqueline Kent Cooke yelled at his mother, “Hurry up, Jew.” Haberkorn’s wife asked Cooke, “What did you say?” to which she repeated, “Hurry up, Jew. I got places to be.”

“I walked up to her and asked her why she said that,” Haberkorn recalled. “She took her purse, which was a mirrored glass purse, and smashed me with it.”

Shortly after, one Haberkorn’s daughters started filming the incident in which Cooke’s boyfriend tried to intervene.

Per the NY Daily News,

“She just f—ing hit me!” Haberkorn is heard protesting.

“You called me a f—ing Jew,” an outraged Haberkorn responds before moving back toward the daughter who was recording.

The video turns shaky but then shows Haberkorn losing his balance as Cooke pulls him down in an apparent high-speed tackle.

“What are you doing? You’re throwing a woman on the floor,” Cooke’s boyfriend accuses Haberkorn, the video shows.

“I didn’t f—ing touch her,” he responds.

“She falls down and tries to hold or take me down,” Haberkorn said, describing Cooke as “clearly drunk.”

Check out the footage below.