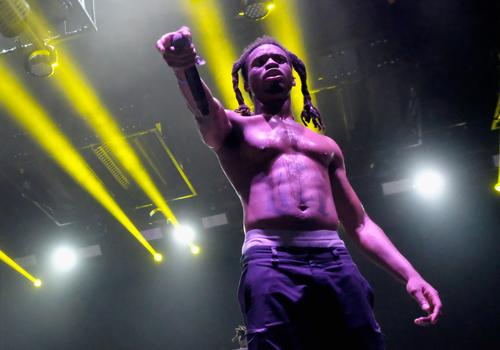 At the beginning on December, Denzel Curry shared some unfortunate news pertaining to his upcoming project Taboo. Fans were eagerly expecting the album to drop in 2017 but he revealed that he wouldn’t be releasing it until he felt that it was at the level quality he wanted it to be at. While we wait for an update on the album at some point in the future, it’s safe to say he’s been locked in the studio. Most recently, he shared a glimpse an upcoming collaboration he’s been working on.

Denzel Curry and IDK have been locked in the studio recently and they shared a few snippets what they’ve been working on. While there only short snippets what they got in the cut, it sounds like they have a certified banger in the cut right now. Curry shared a snippet IDK’s part the song while IDK shared some Curry’s verse on the track. The production sounds fire and overall, it’s looking like a promising collaboration between the two young artists. Hopefully, this song ends up surfacing at some point in the near future.

Aside from their upcoming collaboration together, the two artists are about to hit the road together in the coming months. Both IDK and Denzel Curry will be serving as the tour openers on A$AP Ferg’s upcoming North American “Mad Man Tour.” With the line-up alone, it’s looking like it’ll be one the most memorable tours the year. Who knows, maybe Denzel Curry and IDK will premiere their collab while on the road.

Check the clips below.