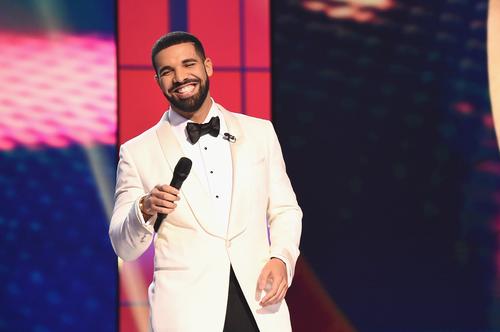 Rumors that Drake may have rekindled an old flame with a past love interest have been swirling one day after the Golden Globes after party that he was spotted at. Besides hanging with the likes Alfre Woodard and Mary J. Blige, the Canadian rapper also found some time in his busy schedule to get more than a little cozy with Zoe Kravitz, an actress who was definitely open to this arrangement.

As per a video that was shared by TMZ earlier today, Drake and Kravitz were standing in an almost full-on embrace, their arms standing out against the black material for both their outfits. They seemed to be having a grand time as well, laughing and talking with the giddiness two compatible human beings who have reconnected by chance.

Afterwards, Drizzy stepped behind the decks and was the DJ for at least part the after party. As the clip shows, Kravitz was in full-on dance mode and never seemed to stray too far away from where the rapper was doing his mixing. Check out the full video below.

What’s interesting is that Zoe Kravitz have never admitted to dating Drake, although pictures like this one pretty much confirmed their “more than friends” relationship status. Then, there was her non-answer when someone asked her about dating Drake during an appearance on Watch What Happens Next. Check that clip out below.

Do you think Drake, the consummate hip-hop ladies man, and Zoe Kravitz make a good couple? Could their Golden Globes reunion lead to something more down the road? Let us know in the comments.