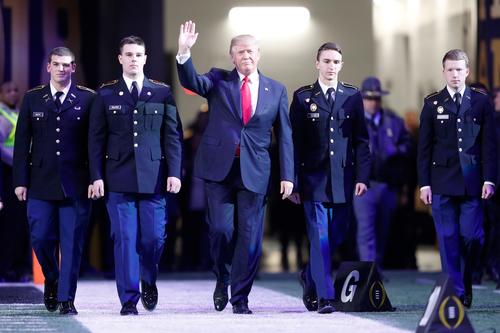 As reported, Donald Trump is down in Atlanta at the moment watching Alabama take on Georgia in this year’s College Football Playf National Championship. Before the game kicked f though, Trump decided to partake in an over-the-top entrance on the field, where he waved to the crowd and had a big fake smile on his face, while military personnel walked by his side.

The President was met with mostly cheers from the crowd (remember he’s in the South and both Alabama and Georgia were Trump states in the 2016 election). There were some boo’s from the crowd as well, but it was pretty much drowned out by the roaring ovation he received.

Trump later stood for the National Anthem with his hand on his chest, while lip syncing the lyrics to the “Star Spangled Banner.”

Donald Trump isn’t the only celebrity in attendance however. WWE legend Ric Flair, The Migos, Samuel L Jackson, and several other past players & athletes from both teams were also at the Mercedes-Benz Stadium for the big game.

In addition, Kendrick Lamar is also set to perform at the first-ever Halftime Show, which will have for you once that footage is available.

In the meantime, check out Trump’s loud ovation & entrance to Monday night’s game (below).