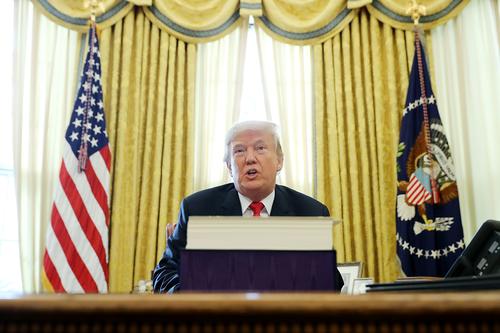 Donald Trump Responds To Kim Jong Un’s Threat: “I Too Have A Nuclear Button”

Well it appears Donald Trump is wasting no time in 2018 with making boneheaded statements & announcements. A couple days ago, North Korean leader Kim Jong Un announced that his country would defy U.N. sanctions and would be “mass producing” nuclear warheads. He also added that he even had a nuclear button on his desk.

So rather than trying to make the American people at ease, Donald wasn’t going to be outdone by the North Korean leader, and decided to send out another one his ill-thought, preposterous tweets Tuesday night saying that he too has a nuclear weapon at his desk, but that his is “much bigger and more powerful than his. Trump also made a dig at Kim Jon Un’s “depleted and food starved regime” as well, which the North Korean leader probably won’t appreciate either.

“North Korean Leader Kim Jong Un just stated that the ‘Nuclear Button is on his desk at all times.’ Will someone from his depleted and food starved regime please inform him that I too have a Nuclear Button, but it is a much bigger & more powerful one than his, and my Button works!,” Donald tweeted a little while ago.

In addition to that, Trump also tweeted out that he would be announcing “THE MOST DISHONEST & CORRUPT MEDIA AWARDS OF THE YEAR on Monday at 5:00 o’clock,” continuing his unnecessary war on words with the media.

Check out Trump’s latest tweets (below) and sound f in the comments. Do you like him speaking reckless on Twitter or nah?