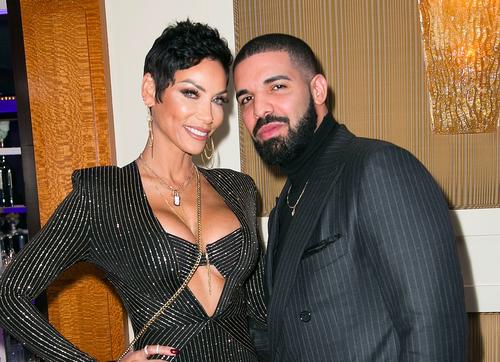 Drake was in attendance at Nicole Mitchell Murphy’s surprise 50th birthday party in Beverly Hills Friday night. The model, tv personality, designer, and actress shared a photo herself and Drake on Instagram, thanking the rapper, and his growing whiskey brand. “Thank you @[email protected] for celebrating my 50th Birthday with me,” she wrote.

Drake shared his own post from the event, writing, “Wore a suit every day since New Years…Happy Birthday Goddess.”

Murphy documented the rest the night on her Instagram, which included a birthday serenade by Johnny Gill, and hitting the dancefloor in a very glamorous Michael Costello jumpsuit.

Nicole was on her way to what she thought was dinner with her mother when she was surprised by friends and family. “Thank you all for my beautiful surprise birthday party,” she wrote in a caption for a video documenting the surprise. “I love you all for taking the time out to do this for me. I’m truly blessed to have such wonderful friends & my beautiful family.”

Murphy also revealed that she bought herself a flashy new Mercedes in a post from earlier in the day. When TMZ approached her outside the event, they asked if she had any info on the rumored sequel to “Coming To America,” which she said she knew nothing about. Nicole had five children with comedian Eddie Murphy, who she married in 1993. The two divorced in 2006.