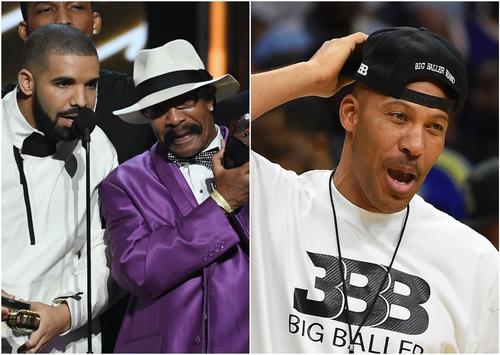 Lavar Ball, father athletes Lonzo, LiAngelo, and LaMelo Ball, and founder Big Baller Brand, is a divisive personality in sports. He’s known for being very outspoken, a quality some have criticized him for, but others admire. Dennis Graham, father Drake, was asked his opinion on LaVar by a TMZ photographer this week, and from one famous dad to another, he had nothing but praise for Ball.

“I love him because he’s outspoken,” said Graham. “He’s an outspoken guy, and that’s what you gotta be. You gotta speak your mind.”

Ball certainly plays by his own rules, which is something Graham respects. “People have been kissing butts for too long,” he argued. “He doesn’t do that. He speaks his mind. I love that.”

Earlier this week, Dennis shared some thoughts on Drake’s recent video for “God’s Plan,” in which he gave away nearly $1 million his label’s money to residents Florida. He quickly shut down a question about whether Drake could be “mismanaging his funds” with the video. “No, no, no. I’m not worried, that was through something else,” he said. I don’t know what happened there but he’s good. Trust me… He’ll always be good.”

RELATED: Rich Homie Quan Is Not Down To Collaborate With Lonzo Ball

Coincidentally, LaVar’s son Lonzo, who was drafted to the Lakers this season, is also an aspiring rapper. He released his debut album Born 2 Ball earlier this month. The closing track, “LaVar,” is a tribute to his father. It happens to sound a little like an attempt at a So Far Gone era Drake track.