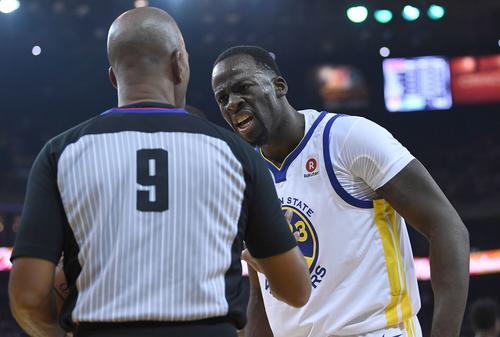 Draymond Green had to know this one was coming.

The NBA has fined the Warriors All-Star forward $25,000 for criticizing the league’s ficiating. Draymond’s comment’s came after Golden State’s 121-105 victory over the Los Angeles Clippers on Saturday.

RELATED: Steph Curry Says He’ll “Do What It Takes” To Buy The Carolina Panthers

Draymond picked up his league-leading 11th technical foul the season in the win when he approached referee Tyler Ford to address a play in which he thought he was fouled while attempting a dunk. After the game, Green told The Athletic (h/t ESPN) that the league should look into hiring new ficials to replace the current ones.

According to Green, ficials are making things personal and it’s one the biggest issues facing the league.

“It’s bad,” Green said. “It’s horrible. It’s really bad. I don’t know why it is. But I think it’s ridiculous. It’s ruining the game. … It should be one , if not the main priority, to be solved. It definitely should.”

“They can get a new crop ficials], a whole new crop,” Green said. “Too many personal things going on. Too much me against you. It just don’t work that way.”

In addition to the technical he picked up over the weekend, Green had most recently been ejected during the second quarter Golden State’s win over the Memphis Grizzlies on December 30th. It was Green’s second ejection the season which is tied for second most in the NBA behind teammate Kevin Durant, who has been tossed three times thus far.