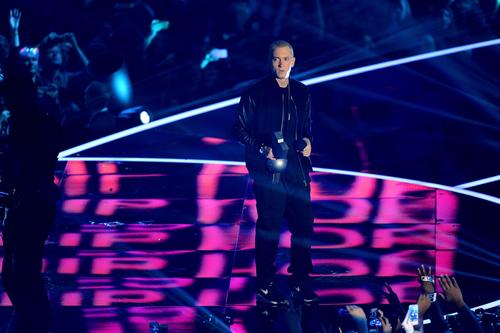 We’re one week deep into 2018 and hip-hop is still holding it down on the Billboard top ten charts. The sales round-up for the latest week signifies that Eminem’s Revival (#4), Kendrick Lamar’s DAMN (#9), and G-Eazy’s The Beautiful & Damned (#8) continue to boast replay value; it’s especially impressive for Kendrick, who dropped his latest album back in April. The big winners the week were Travis Scott and Quavo, whose project Huncho Jack Jack Huncho climbed above Eminem for a comfortable stay in the #3 spot.

Currently, pop heavyweights Taylor Swift and Ed Sheeran hold down the number one and two spots, respectively, but there remains a solid hip-hop presence nevertheless. DAMN continues a thirty-eight week long stint in the top twenty, and was no doubt boosted by the release “LOVE.” And while Eminem’s Revival was hit with many mixed-to-negative reviews, it’s clear that Marshall’s name still carries weight. In case you missed it, Em recently took aim at his critics in the excellent “Chloraseptic Remix,” featuring 2 Chainz and Phresher. Plus, Post Malone’s “Rockstar” success helped him round out the top ten in the final spot.

For a complete list the top ten, check it out here: