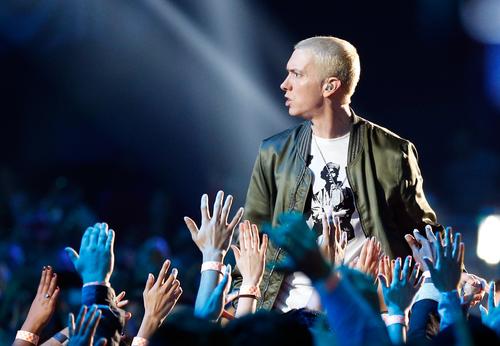 Eminem’s love life has become one hip-hop’s ongoing narratives. While gossip fiends tend to favor the more publicly accessible couples a la 21 Savage/Amber Rose or Kanye West/Kim Kardashian, where Eminem news is concerned, table scraps are more than acceptable. It didn’t take long for a mysterious video featuring Eminem and a mystery woman to light a gas-fire beneath the internet’s infinite ass, with plenty wondering if the reclusive Marshall Mathers was actually exploring the type relationship his lyrics so fervently decry. However, those a more conspiratorial persuasion were suspicious the video, writing it f as a publicity stunt, citing the archaic Bioshock-esque motel as a step too far removed from reality.

RELATED: Eminem Cuddles Up With Possible Girlfriend In New Video

It would appear that the conspiracy theorists have secured a rare W. Today, Eminem shared a teaser for his upcoming “River” video, which quickly takes viewers to a familiar place. The opening shot finds Eminem face to face with his the woman in question, who is quite obviously an actor. “This is so much more important than all that other shit,” she says, putting Em on blast. Quick cuts to a documentary style setup, in which the woman, a man, Eminem, and Ed Sheeran tackle questions about love and relationships. “My personal life is not exactly a highlight reel,” says Em, sound-tracked by somber guitar.

In the caption, Em confirmed the video would be dropping on Wednesday, aka Valentine’s Day. If you’re looking for a date night movie replacement, set a timer for ninety minutes and play the “River” video on loop until completion.