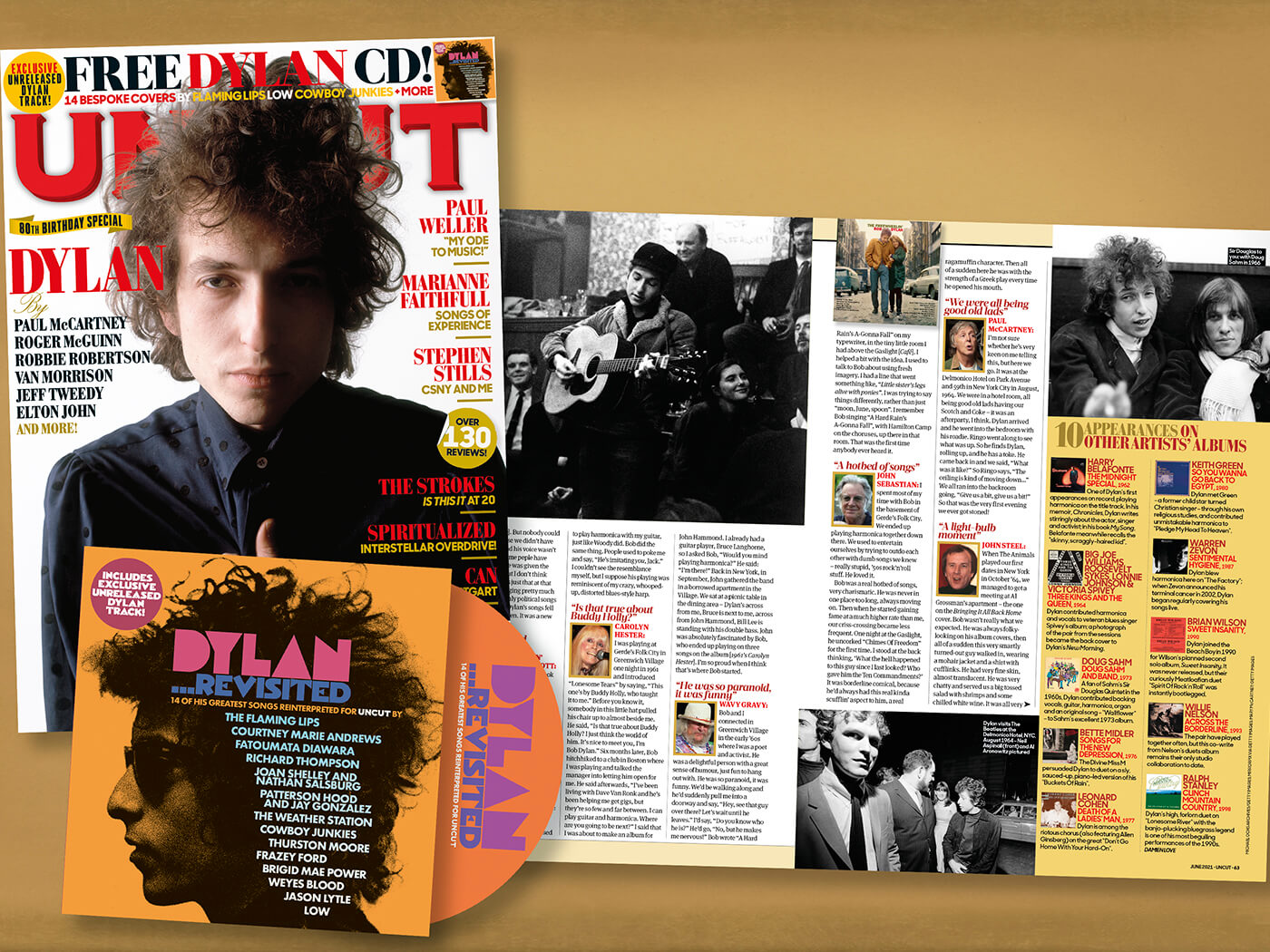 Encounters with Bob Dylan: “He was a real hotbed of songs”

To complement the astonishing Bob Dylan covers CD that comes free with the new issue of Uncut – which is in shops now and available to buy online by clicking here – the magazine itself includes a unique celebration of Bob Dylan at 80. We’ve asked friends, collaborators and admirers – including Paul McCartney, Robbie Robertson, Jackson Browne, Roger McGuinn, Jeff Tweedy, Van Morrison, Graham Nash, Kris Kristofferson, Elton John, Peggy Seeger, Roger Daltrey and Richard Thompson – to share their most memorable Dylan encounter with us.

Spanning six decades, from 1960 to 2020, these remarkable stories shed new light on rock’s most capricious and elusive genius, whose startling transformations from folk hero to electrified renegade and beyond continue to captivate us all. To begin, then, let us return to Minnesota, Dylan’s home state, where an earnest young admirer awaits the arrival of folk royalty…

PEGGY SEEGER: Bob was always around whenever Ewan [MacColl] and I played in Minneapolis, where he was a student at the university. He’d ask us for our autographs. He was always very neat and carried a little briefcase. Two years later, when we went back to Minneapolis, the organiser said, “Remember that little fella who was always attached to you? You know that’s Bob Dylan, right?” You’d be astounded at how far away from the pop scene Ewan and I were, so when Robert Zimmerman became Bob Dylan it didn’t mean anything to us.

Not long after, he came to the UK and performed at the Singers Club [December 1962]. But nobody could hear him because we didn’t have microphones and his voice wasn’t loud enough. Some peple have since said that he was given the cold shoulder, but I don’t think that’s true. It was just that at that time we were singing pretty much folk songs or highly political songs in our club. Bob Dylan’s songs fell halfway in between. It was a new kind of song.

RAMBLIN’ JACK ELLIOTT: In late 1961, I took a bus out to New Jersey to visit Woody Guthrie in hospital. This kid was there, quite an engaging guy – kinda pudgy and funny-looking, but nice. He told me he had all my recordings. It was Bob. Back in New York City, he’d ask me all about Woody, who I’d known since 1951. I was some years older than Bob and got him into the musicians’ union. At his first paid performance at Gerde’s Folk City, they put up a cardboard sign written in ballpoint pen: “Appearing tonight: Son of Jack Elliott”. So there was some sort of parental relationship going on there, you might say. I used to play harmonica with my guitar, just like Woody did. Bob did the same thing. People used to poke me and say, “He’s imitating you, Jack.” I couldn’t see the resemblance myself, but I suppose his playing was reminiscent of my crazy, whooped-up, distorted blues-style harp.

CAROLYN HESTER: I was playing at Gerde’s Folk City in Greenwich Village one night in 1961 and introduced “Lonesome Tears” by saying, “This one’s by Buddy Holly, who taught it to me.” Before you know it, somebody in this little hat pulled his chair up to almost beside me. He said, Is that true about Buddy Holly? I just think the world of him. It’s nice to meet you, I’m Bob Dylan.”

Six months later, Bob hitchhiked to a club in Boston where I was playing and talked the manager into letting him open for me. He said afterwards, “I’ve been living with Dave Van Ronk and he’s been helping me get gigs, but they’re so few and far between. I can play guitar and harmonica. Where are you going to be next?” I said that I was about to make an album for John Hammond. I already had a guitar player, Bruce Langhorne, so I asked Bob, “Would you mind playing harmonica?” He said: “I’m there!” Back in New York, in September, John gathered the band in a borrowed apartment in the Village. We sat at a picnic table in the dining area – Dylan’s across from me, Bruce is next to me, across from John Hammond, Bill Lee is standing with his double bass. John was absolutely fascinated by Bob, who ended up playing on three songs on the album [1961’s Carolyn Hester]. I’m so proud when I think that’s where Bob started.

JOHN SEBASTIAN: I spent most of my time with Bob in the basement of Gerde’s Folk City. We ended up playing harmonica together down there. We used to entertain ourselves by trying to outdo each other with dumb songs we knew – really stupid, ’50s rock’n’roll stuff. He loved it.

Bob was a real hotbed of songs, very charismatic. He was never in one place too long, always moving on. Then when he started gaining fame at a much higher rate than me, our criss-crossing became less frequent. One night at the Gaslight, he uncorked “Chimes Of Freedom” for the first time. I stood at the back thinking, ‘What the hell happened to this guy since I last looked? Who gave him the Ten Commandments?’ It was borderline comical, because he’d always had this real kinda scufflin’ aspect to him, a real ragamuffin character. Then all of a sudden here he was with the strength of a Greek play every time he opened his mouth.

You can read many more fascinating encounters with Bob Dylan, going right up to Rough And Rowdy Ways, in the June 2021 issue of Uncut – on sale now!