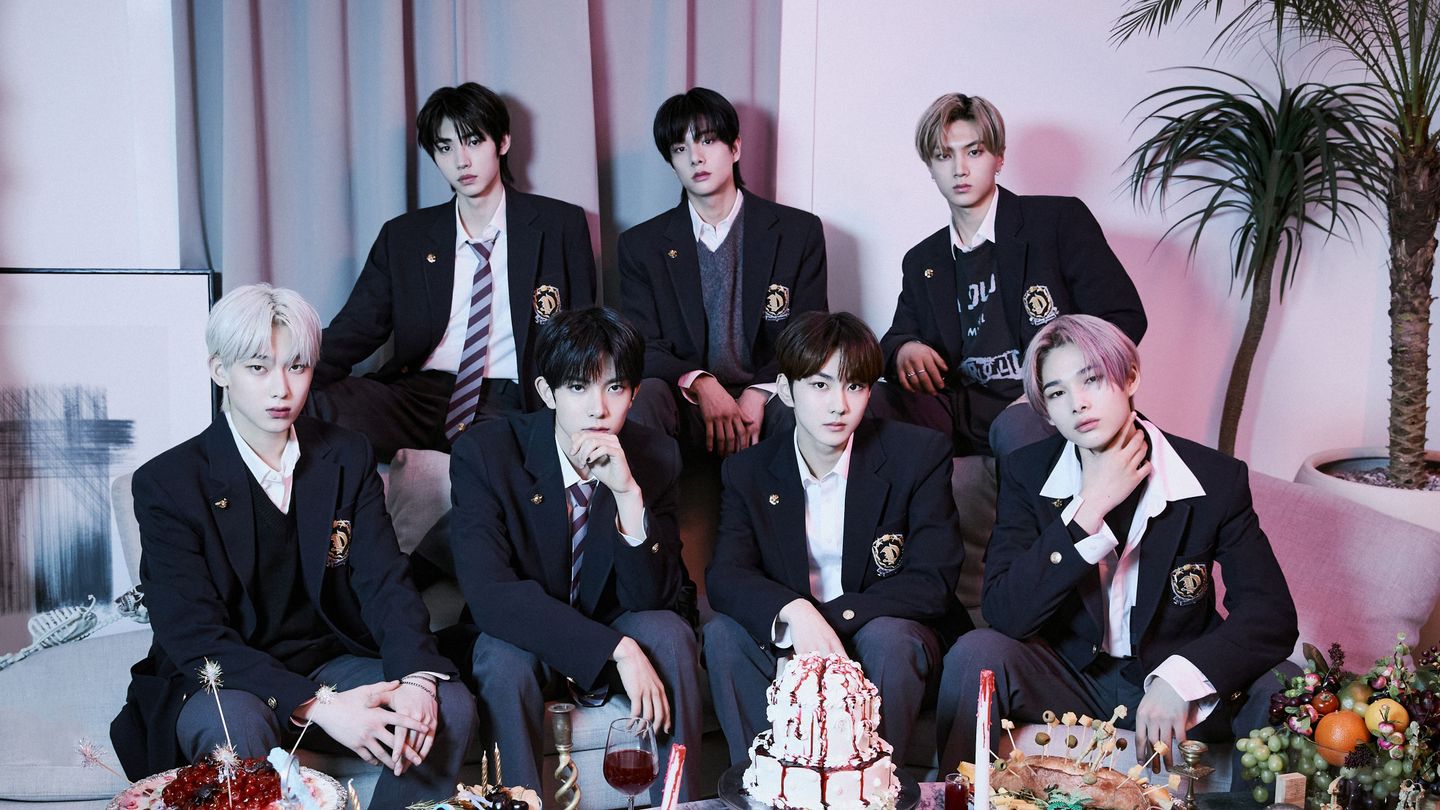 When MTV News connects via Zoom with Enhypen (stylized all-caps), the South Korean pop group’s seven members sit split into two neat rows: Heeseung, Jake, Jay, and Sunoo in the front, followed by Jungwon, Sunghoon, and Ni-ki right behind them. Their outfits are carefully coordinated in neutral hues, and their hair is styled with boyish side-parts, with the exception of Ni-ki, whose forehead is covered by a precisely placed ash-blonde fringe. Ranging from 15 to 19 years old, it’s only been five months since they debuted with their first project, Border: Day One, the highest-selling release of all the work put out by last year’s rookies. Yet despite their ages, the artists carry themselves with an air of poise — and maybe a little mystery.

Across their lavish music videos and allegorical lyrics, Enhypen have crafted an intricate universe filled with vampires and Shakespearian odes. They aren’t simply mystifying performers, sitting in this conference room to talk about their second mini-album, Border: Carnival, which is out today (April 26); they are both the creators of and creatures within a multidimensional fable that was laid out last year. Formed by Belift Lab, a joint venture between South Korean entertainment companies CJ ENM and HYBE Corporation (formerly known as Big Hit), Enhypen came together through the survival show I-Land. The program’s opening scene featured a quote from the German writer Hermann Hesse’s novel Demian that might also be applied to the group’s own story: “The bird fights its way out of the egg. The egg is the world. Who would be born must first destroy a world.”

If Border: Day One cracked the shell, now the artists are ready to spread their wings. The six-track Border: Carnival tracks their arrival to the dazzling, dizzying world of fame in three distinct versions — “Up,” “Hype,” and “Down” — with distinct visuals filtered through the sugary highs and crashing lows of visiting such a colorful festival. These themes are captured in the music video for the galloping pop-rock single “Drunk-Dazed,” where they throw a house party that quickly devolves into a chilling nightmare. The psychedelic “Intro: The Invitation” offers a deliciously dramatic first taste of this journey, while the hip-hop and rock sounds of “Mixed Up” reflect their vulnerable experience growing up in the public eye. Throughout, there are symbols to be deciphered with seemingly endless interpretations — Victorian attire, crimson blood — but all signifying a world waiting to be discovered.

MTV News: Congrats on your second mini-album! Now that you’ve crossed Border: Day One, how does it feel to step into this Carnival, as you’ve named it?

Jungwon: Border: Carnival is where we’re still sort of confused, but these are honest feelings of us trying to enjoy this moment. We’re looking forward to [our fans] Engenes to also enjoy this new album, and we’re really excited about our new music and showing our performances.

MTV News: Your debut happened only five months ago, but how have you changed since then?

Jake: Like you said, it’s only been five months, so I think we’re still at the very early stages of our careers. But we feel like we have taken a huge step as artists, and that we grew a lot as a team, especially on this album. We hope that our fans will be able to see that chemistry on stage as well as off stage.

MTV News: How do you feel when you look at your achievements so far? Is it challenging to think you have so much responsibility at a young age?

MTV News: The pandemic has been hard for everyone, but groups like Enhypen, who debuted after it all started, haven’t had many opportunities to meet their fans. What are you learning from these trying times?

Sunghoon: Unfortunately, we haven’t had a lot of chances to meet our fans, but still, we have received a lot of love and a lot of support. That made us learn how precious our fans are, and we want to give back to them. We want to keep on working hard so that someday we can meet face to face, perform, and sing. It just happens that we have to wait a little bit more.

MTV News: Your main concept for this comeback is “carnival,” and your title track is named “Drunk-Dazed.” Did you intend to capture these feelings of astonishment and excitement that you experience at a festival?

Jay: After we debuted, what we experienced are things I never experienced before, and I believe it’s the first time for all the other members too. Everything seems really elaborate, really glamorous, but also very unfamiliar. I think that’s what you would experience at a carnival, in regards to unfamiliarity, but also all the fanciness, the glitter and glamour. It’s like all these emotions and feelings melted down into one song.

MTV News: Can you talk about the music video for “Drunk-Dazed” and share some memories of the shoot?

Heeseung: I remember practicing the chorus part on the set. There was this moment when we were all in the center, and it was great. Then, we saw how it was turning out and it was really amazing. It was also the first time we were doing the choreography outside of the practice studio. All the staff was giving us positive feedback, and that made us feel really great. It was a fantastic experience.

MTV News: What are the tracks you most relate to in this album and why?

Jungwon: The song that resonated with me the most is the fourth track, “Mixed Up,” because it’s about things that I didn’t experience as a trainee. After I-Land and after our debut, I started to receive all this attention from a lot of people, so this is when the whole environment changed for me and brought up these feelings of being mixed up.

Jake: For me, it has to be our title track, “Drunk-Dazed,” because it expresses the overall theme and message of the album really well. It’s one of my favorites.

MTV News: Engenes all over the world want to know: What’s the relation between Enhypen and vampires?

Heeseung: [To Jake:] What do you think?

Jake: Actually, we’re very curious about that. What do you think?

MTV News: For me, it seems like there are two different stories happening simultaneously. One is Enhypen as you are now, as idols, and the other is a more fantastical one.

Jake: I think the theory you have is a really good one.

MTV News: Are you aware of the theories that Engenes create?

Jake: We do know that a lot of Engenes come up with their own theories, and it’s really exciting to look at them and all their ideas.

MTV News: So what’s the real story behind it?

Jake: Yes, we want to leave it for the fans to interpret it themselves.

Heeseung: If you interpret or try to divide the storyline using our title tracks as the center of it, I think it will be easier to discover more about our world.

MTV News: Jay, you love rock, so how do you feel about the sounds and visuals in this album?

Jay: The tracks “Mixed Up” and “Drunk-Dazed,” as well as the “Hype” version of the album, really express that rock sensibility. There are a lot of new, fresh, and challenging things that appeal to me. Those themes are similar to how I dress, the kind of clothes that I like, so I really enjoyed it.

MTV News: Heeseung, you once said, “The more time you spend on your work, the less time there is to invest in yourself.” How do you separate your time between work and investing in yourself?

Heeseung: These days, I’m mostly spending time on work, but focusing on work is part of investing in myself. I don’t think those two are very different for me.

MTV News: Jake, where do you feel like you have grown the most for this comeback?

Jake: Now that we have spent more time together as a team, I think our chemistry has definitely improved, as well as having a deeper understanding for one another. But also, in terms of singing and dancing, as well as facial expressions on stage, everything has gotten a lot better.

MTV News: Jungwon, you’re the leader, but how do you stay focused?

Jungwon: I talk to the other members a lot and they give me feedback about what I’m doing and how things are going. That allows me to take an objective view of myself, fix up what I’m doing, and keep on track.

MTV News: Sunoo, you can adapt to any concept easily. What is that process like for you?

Sunoo: There are three concepts in this album, so I had to think a lot about how to adjust [to each of them]. But once we got on set and tried on the outfits, we did a lot of preparations, and I was able to easily adapt to the different atmospheres. Also, especially for the “Up” version, me and the other members studied images and videos of outfits that were similar to that theme, so those efforts made up for it.

MTV News: Sunghoon, Jake, and Heeseung are introverts according to the MBTI personality test. Sunghoon, when do you think it’s an advantage to be introverted?

Sunghoon: There are good and bad things for both personalities, introverted and extroverted. The fact that we have both in Enhypen gives us an advantage, a synergy. I think it’s a good thing that we have a mix of different personalities.

MTV News: Ni-ki, coming from Japan and being the youngest member, how do you feel about growing up with Enhypen?

Ni-ki: The other members always look out for me, and if there’s something I don’t know or that I can’t figure out, they are always right there. They really help me a lot. I feel like I have a family here in Korea.

MTV News: Can you share something about Enhypen’s next adventure, as foreshadowed in “Outro: The Wormhole”?

Ni-ki: I can’t spoil too many details, but I can tell you that we will be back again with great music and great performances that all Engenes can look forward to. So please, look forward to that.