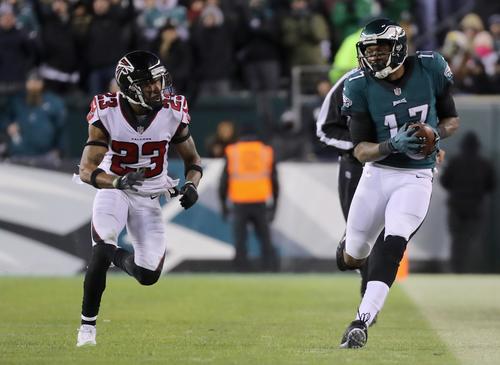 Another chapter disappointment in Georgia sports. Nearly two weeks after University Georgia’s loss to the University Alabama in the National College Football Championship game, hometown fans had to suffer through the Atlanta Falcons succumbing to Philadelphia’s Eagles Saturday evening in the NFC Divisional Playfs.

It was by a score 15-10 that the Eagles pulled a victory advancing to he NFC Championship game to face f against either the Minnesota Vikings or the New Orleans Saints next week. Ultimately, Philly QB Nick Foles rose up to the occasion after struggling to replace the injured Carson Wentz, finishing the game with 23 30 attempts and 246 total passing yards.

The game eventually came to an obvious end in the fourth quarter when Julio Jones was unable to get a hold a pass from QB Matt Ryan on fourth and goal, giving the Eagles no choice but to run down the clock to an inevitable win.

Naturally, Twitter had a great deal commentary on the energizing match up. The feed was a mix celebration on Philadelphia’s end and a comedic dose reality from Falcons fans having to face the fact that their precious Dirty Birds have avoided bringing the Lombardi Trophy back home once again.