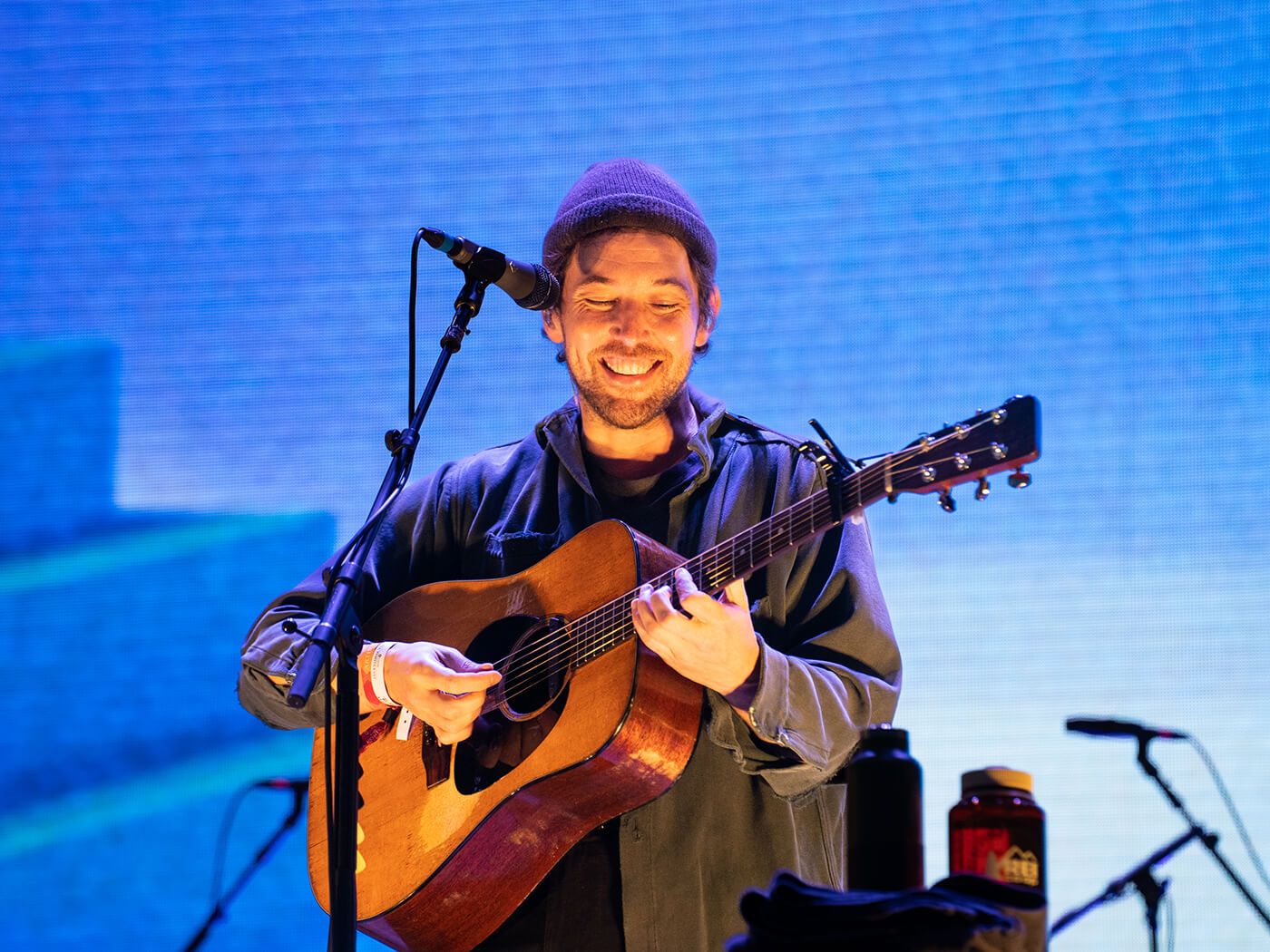 For the last few tours, Fleet Foxes have closed their live sets with “Helplessness Blues” – a song about Robin Pecknold’s struggles to overcome existential worries about his place in the modern world. “What’s my name? What’s my station?” he sings. “Oh, just tell me what I should do”. In the 11 years since the song was first released, you could argue that the conditions that first inspired Pecknold to write “Helplessness Blues” have become more pronounced; but the man singing the song in 2022 is evidently in a different place entirely. Indeed, watching Pecknold bobbing and bouncing around the stage tonight with infectious, Tiggerish enthusiasm, you could be forgiven for thinking that the knotty soul-searching of Helplessness Blues and Crack-Up, its successor, had happened to someone else.

It transpires that Shore – the band’s most recent studio album – was a turning point for Pecknold. Having finally worked through his anxieties, the record was awash with positivity, gratitude and optimism. Even during lockdown and surrounded by the death of his musician heroes, Pecknold refused to turn inward and instead threw himself wide-open. In the midst of all this, the old stereotype of Fleet Foxes as bucolic fabulists resurfaced on Shore – here was an album that celebrated the restorative power of the seasons – “one warm day is all I really need” – as if the elements were perhaps enough to keep his earlier unease at bay. Following Pecknold’s coming of age through his music – from the guileless openness of their debut, through the insecurities of Helplessness Blues and the flux of Crack-Up – Shore was as much about Pecknold recalibrating what Fleet Foxes meant to him as it was about us, in turn, recalibrating our relationship with Fleet Foxes.

In a way, all these Robin Pecknolds are present tonight. Physically, dressed in a camouflage jacket and beanie hat, he doesn’t look much different from the first time Fleet Foxes visited the UK in 2008 (his hair is shorter and the beanie is smaller, though). Meanwhile, as the band revisit the rhapsodic harmonies of “Ragged Wood” and “White Winter Hymnal” from the debut, channel the epic beauty of “The Shrine/An Argument” from Helplessness Blues or map out the elaborate sonic terrain of “Third Of May/Ōdaigahara” from Crack-Up, the arc of his creative progress is clearly laid out. It occurs to me, part way through a free squall of horns on “Third Of May/Ōdaigahara”, that no matter how challenging or involving Pecknold’s songs can occasionally be, the fundamental charms of his band shine through.

“Third Of May/Ōdaigahara” is a mid-point in the set, actually, so I’m getting a little ahead of myself. They’d opened with the first three songs from Shore – “Wading In Waist-high Water” (with Uwade Akhere, their tour support, on vocals), “Sunblind” and “Can I Believe In You”. Considering Pecknold largely recorded Shore himself, this tour is the first time we’ve heard the full band arrangements, which naturally sound fuller. The presence of Andy Clausen, Chloe Rowlands and Willem de Koch from brass ensemble the Westerlies further bolsters the sound – but never to the point where they overwhelm the songs. For a band that expressly strives to present songs of ravishing prettiness, they are also commendably robust. They circle back to their debut for a brace of songs before stretching out for the longer, more expansive songs. Flanked by his right-hand man, Skyler Skjelset, Pecknold leads the band through the song’s winding contours and digressive segments, reinforcing the point that – however much Pecknold is driving this – Fleet Foxes are a communal endeavour. Incidentally, props to Morgan Henderson – clearly at the receiving end of Pecknold’s ambitious musical vision – who is tasked with playing flute, stand-up bass, tambourine, bass and saxophone at various points during tonight’s set. Meanwhile, dressed in slim-fitting black shirt and trousers, Skjelset acts as both guitarist and bandleader; one minute, coaxing bright, clean lines from his guitar and the next communing with the Westerlies on the harmonies for “White Winter Hymnal”. There are some fine harmonies, too, from bassist Christian Wargo.

“… Hymnal” acts as a kind of buffer for the rest of the main set. The second half is rangier somehow, featuring a version of “Phoenix” – from Big Red Machine’s How Long Do You Think It’s Gonna Last? album – and an acoustic section from Pecknold which includes a cover of Judee Sill’s “The Kiss”. Driven by Casey Westcott’s gently swung keys and Chris Icasiano’s fluid drumming, “Phoenix” consciously recalls the soulful vitality of The Band – “How do you bear the full weight?” sings Pecknold, as if you need further clues as to what’s afoot here. The Big Red Machine collaboration, of course, finally brings Pecknold into direct contact with The National’s Aaron Dessner and Bon Iver’s Justin Vernon – contemporaries among the early 00s collegiate indie rock explosion. More than most, Pecknold and Vernon’s trajectories, meanwhile, have been broadly similar: from hirsute backwoods beginning through their struggles with success and complex sonic experiments. While “Phoenix” is one of the stand out tracks on How Long Do You Think It’s Gonna Last?, I can’t help but wonder how a more comprehensive country soul Fleet Foxes record would sound.

The rest of the set swells and eddies towards Helplessness Blues’ closer, “Grown Ocean”, a thrumming, beautiful song where Pecknold – reborn as a “wide-eyed leaver, always going” – finally finds his peace. Pecknold returns for a sun-lit “Montezuma” before Uwade joins them for a warm, communal singalong through “For A Week Or Two” and “Going-to-the-Sun Road” and, finally, “Helplessness Blues” itself. In a way, it feels like we’re at the end of a protracted Phase One for Fleet Foxes – where the business begun on their debut album has reached some kind of natural resolution on Shore, with their tide-like ruminations on ageing, loss and uncertain times. Where next..?