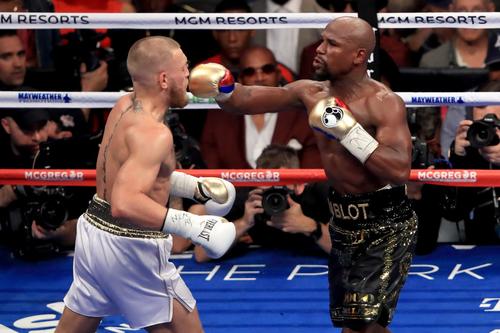 Floyd Mayweather and Conor McGregor seem destined to talk shit forever. The latest jabs came out Mayweather’s corner, although the UFC star was quick to respond with a post his own.

RELATED: 50 Cent Believes Conor McGregor Would Lose To Him In A Street Fight

Mayweather took to twitter yesterday afternoon to troll McGregor about his rumored beef with the Irish Mafia, which stems from an incident that allegedly took place at an Irish pub in late November.

The 40-year old boxer posted a screen shot  a headline which read, “Conor McGregor Allegedly Punched A Member Of The Irish Cartel And May Have A 900 Bounty On His Head.” Mayweather added the following text in his tweet, “I already fucked you up in 2017, now they about to fuck you up in 2018. You’re about to start your new year f with a bang.”

Hours later, Mayweather jumped over to his instagram account to share several photos from his boxing match against McGregor, which were accompanied by captions such as “You violate and I will demonstrate!!” and “The new King Ireland, it took me only 28 minutes.”

McGregor also posted a picture his own on IG, which showed Mayweather bent over with his gloves covering his head. The caption read, “Violate these nuts.”

This latest back and forth between the two fighters comes a few weeks after McGregor trolled Mayweather by simply tweeting, “Pussy,” in regards to the retired boxer’s rumored interest in a multi-fight UFC deal.

Check out their latest social media jabs below.