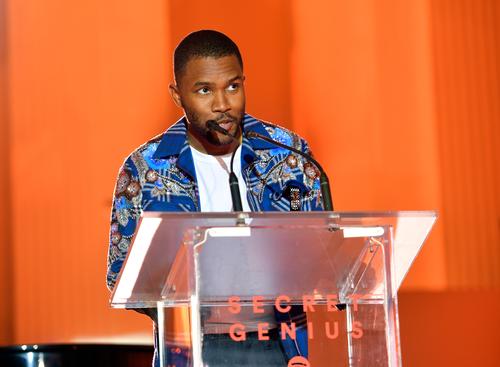 By now most you are aware that Frank Ocean isn’t one to do interviews or jump on social media to keep fans updated, so unfortunately for us it’s pretty hard to follow his whereabouts. In fact, most the time Frank announces something online it’s his Tumblr page and fans have to usually decipher a cryptic message to uncover the news, and that’s exactly what appears to have happened Tuesday night.

With no warning at all, Frank uploaded a picture onto his Tumblr page a man bundled up outside in a city setting. At first look you think it’s just a normal picture, but if you look closer at the man’s hat, fans have uncovered a possible cryptic message, suggesting that Frank is going to have a big 2018.

This latest  post comes about a month after Frank hinted to sitting on another album that hasn’t been released yet. “Well I made the album before 30. I just ain’t put that bitch out! — quotes from an interview I haven’t given haha,” Frank wrote on Tumblr.

While nothing is confirmed and the picture could simply mean nothing and its possible we’re looking too deeply into, this kinda has Frank written all over it. So hopefully he’s trying to tell us that 2018 is about to be a big year for the R&B singer.

RELATED: Twitter Reacts To Frank Ocean Revealing He Has A Finished Album

Check out the picture (below) and its post RIGHT HERE & let us know what you think! Is Frank delivering another cryptic message here or is this nothing?