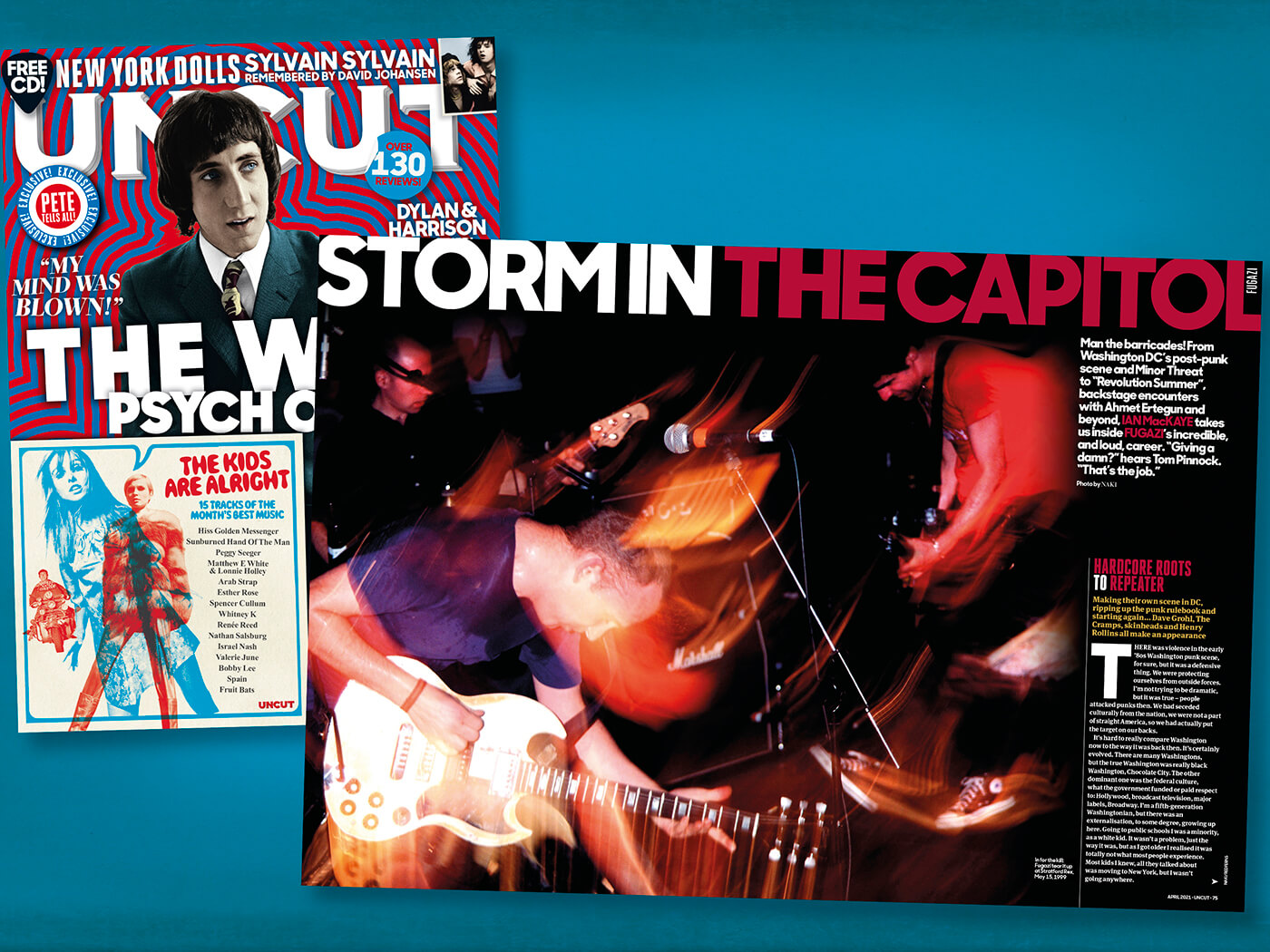 Fugazi’s Ian MacKaye: “We decided we were going to start a new scene”

Man the barricades! The new issue of Uncut – in shops now or available to order online here, with free P&P for the UK – features Ian MacKaye’s first-person account of Fugazi’s incredible, and loud, career at the vanguard of America’s post-hardcore scene. In this extract, he recalls being inspired by Sex Pistols and The Cramps to form Minor Threat, before ripping it up and starting again in even more ambitious fashion with the radical, inspirational Fugazi…

When punk rock appeared, the media were really derisive about it. At first I just took a bite of the media’s pie and thought, “Yeah, this is fucking ridiculous, these idiots stabbing themselves with safety pins and vomiting into each other’s mouth…” But I had really good friends with great taste who were into it, so I had to listen. When I heard “Bodies” by the Sex Pistols, it hit me that this was the underground, the counterculture. I’d really believed in music as a revolutionary thing growing up in the ’60s, but then by the ’70s it seemed like everyone just wanted to rock, so I’d given up on music in the sense of a community. With punk, it was like being led into a secret cavern. On February 3, 1979, I went to see my first punk show, which was The Cramps. To my mind, that’s still the greatest show of all time.

When Minor Threat started playing in December 1980, [we had] this idea of the punk scene creating an external kind of family. It worked, and the scene here in Washington became pronounced, identifiable and connected. But if you look at interviews with us from 1981, we acknowledge that, as part of the scene becoming bigger, you’re going to get more assholes. The media depicted punks as psychopathic, self-destructive, nihilistic looney birds, with the result that psychopathic, self-destructive, nihilistic looney birds thought they were punks. They would start coming to shows, and then the shows became a problem.

After Minor Threat split in 1983, there was a period when the scene was fractured. There were a lot of people – and a lot of people we didn’t know. There was also a burgeoning street-punk/skinhead scene that was so not what me or my friends were interested in. Their behaviour was detestable – stealing, vandalising, gay-bashing – just fucked up, and they were nationalists, thinly veiled white supremacists. It was very discouraging. We decided that instead of quitting punk or driving those people out, we were just going to start a new scene – we’d play music that would not be appealing to those people, let them do their thing at their place and we’d do ours at other venues.

That’s what gave birth to Revolution Summer – we weren’t trying to create a revolution, it was just a moniker, a start date, a somewhat concerted effort to do something creative, to start bands or fanzines, get involved with political stuff. We wanted to take what we’d learned and developed in forming our tribe and take it to another level. These new bands were profound: Beefeater, Rites Of Spring, Kingface, I was in a band called Embrace. They were very offputting to the more conservative punks, but they were challenging, intellectually stimulating. I mean, Rites Of Spring were one of the greatest bands of all time, they were so incredible live.

Embrace only played 11 shows. In March 1986, when we played our last show, I realised my misstep. I had gone in thinking that I wanted to be in a band, but what I really wanted was to play music – and that’s different. Joe Lally used to drive gear for Rites Of Spring. I heard that Joe wanted to play bass in a band, so I called him and said, “Hey, I wanna play some music, but not form a band. Do you wanna play with me?” So we just started to play together.

By this point we had a lot of the early stuff – “Merchandise”, “Waiting Room”, “Bad Mouth” – but I still wasn’t thinking we’d be a band. I’d known Brendan [Canty] and Guy [Picciotto] since 1980 or ’81, they were in Happy Go Licky by this point, so I asked if Brendan wanted to play drums with me and Joe. That really changed the way we sounded – he has his own style of playing, he’s an absolutely brilliant musician. At some point Brendan took a break and we tried all these different drummers, including Dave Grohl.

But Brendan came back, as Happy Go Licky were kind of part-time. So we started playing again. On September 3, 1987, we did our first show. We kept trying to get Guy to play with us, because he was around all the time and Brendan and Guy were pretty inseparable. The original idea of Fugazi was that it was gonna be a revolving cast of people in the band, all sorts of guest musicians and different singers. But Guy couldn’t see a role for himself. At our third show, he hung at the side of the stage, singing backups, and then the fourth show we went down to Richmond, North Carolina, and he came with us. We became more of a group. In October, he sang his first Fugazi song, “Break-In”, and that was incredible.

Read much more about Fugazi in the April 2021 issue of Uncut, out now with The Who’s Pete Townshend on the cover and available to buy direct from us here.