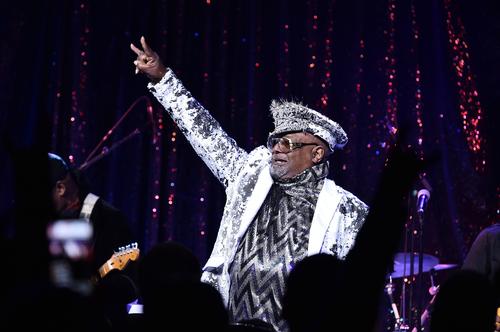 George Clinton is a music legend, that goes without saying, but his influence on hip-hop music in its formative years cannot be underestimated. From the first real G-funk records that both Dr. Dre and Snoop Dogg gifted the world in the early-1990’s and beyond, Clinton and his band Parliament have been hugely important to the groove-laden sound old-school rap music and sampling culture in general. Today, he answered some fan questions during a AMA and revealed who his favorite artists today are.

RELATED: Offset Gets Cardi B’s Name Tattooed On His Neck

When he was asked what current hip-hop tracks he’s blasting out his speakers on the regular, Dr. Funkenstein fered up some surprising answers. For one, he’s rocking to the sounds Cardi B, which makes me want to hear a full-blown funk cover “Bodak Yellow” one these days. Can the good doctor make it happen? Only time will tell.

Among his other favorites are Kendrick Lamar, Jay-Z’s 4:44 album and, as he put it, “all that shit coming out Atlanta.” Young Thug, Migos, Gucci Mane, Lil Yachty and more should be put on notice: they’re getting spins from a legend.

Later on, he was asked what his drug choice was, the answer won’t shock anyone – weed course. However, during his response to an unrelated question, Clinton let it slip that Toronto, the city best known for producing the Drake-iest all rappers, is apparently among the best places in on the continent to get that good green stuff. Check out his answers below.

Finally, he’s on record as saying that his favorite bass line in one his songs is the one f his latest track, “I’m Gon Make U Sick O’Me,” which features veteran rapper Scarface in a vocal capacity. You can stream the song below Spotify.