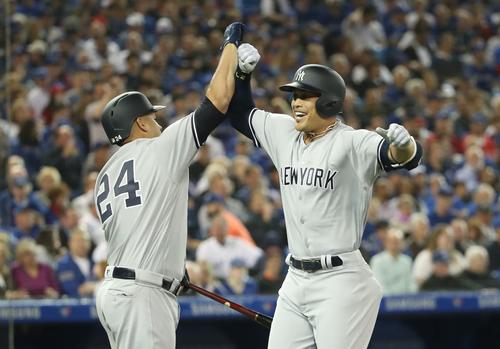 Stanton, who the Yankees acquired from the Miami Marlins this fseason, crushed a homerun f J.A. Happ in his first at bat as a member the Yanks to give the Bronx Bombers a 2-0 lead over the Toronto Blue Jays in the first inning their season opener.

According to ESPN, the opposite field blast measured at 426 feet by Statcast and the exit velocity was measured at 117.3 mph, the fastest for a batted ball at Rogers Centre since Statcast began tracking in 2015. Additionally, MLB.com says the homerun was the hardest exit velocity for any home run hit to the opposite field since Statcast began tracking such a stat.

Stanton is DHing today and batting third, in between Aaron Judge and Gary Sanchez, making for a nightmarish lineup for opposing pitchers. Last season with Miami, the 28-year old slugger belted an MLB-best 59 home runs and racked up 132 RBIs en route to NL MVP honors. And he looks like he’s ready to pick up right where he left f.

Check out the footage his first many homeruns as a member the Yankees below.