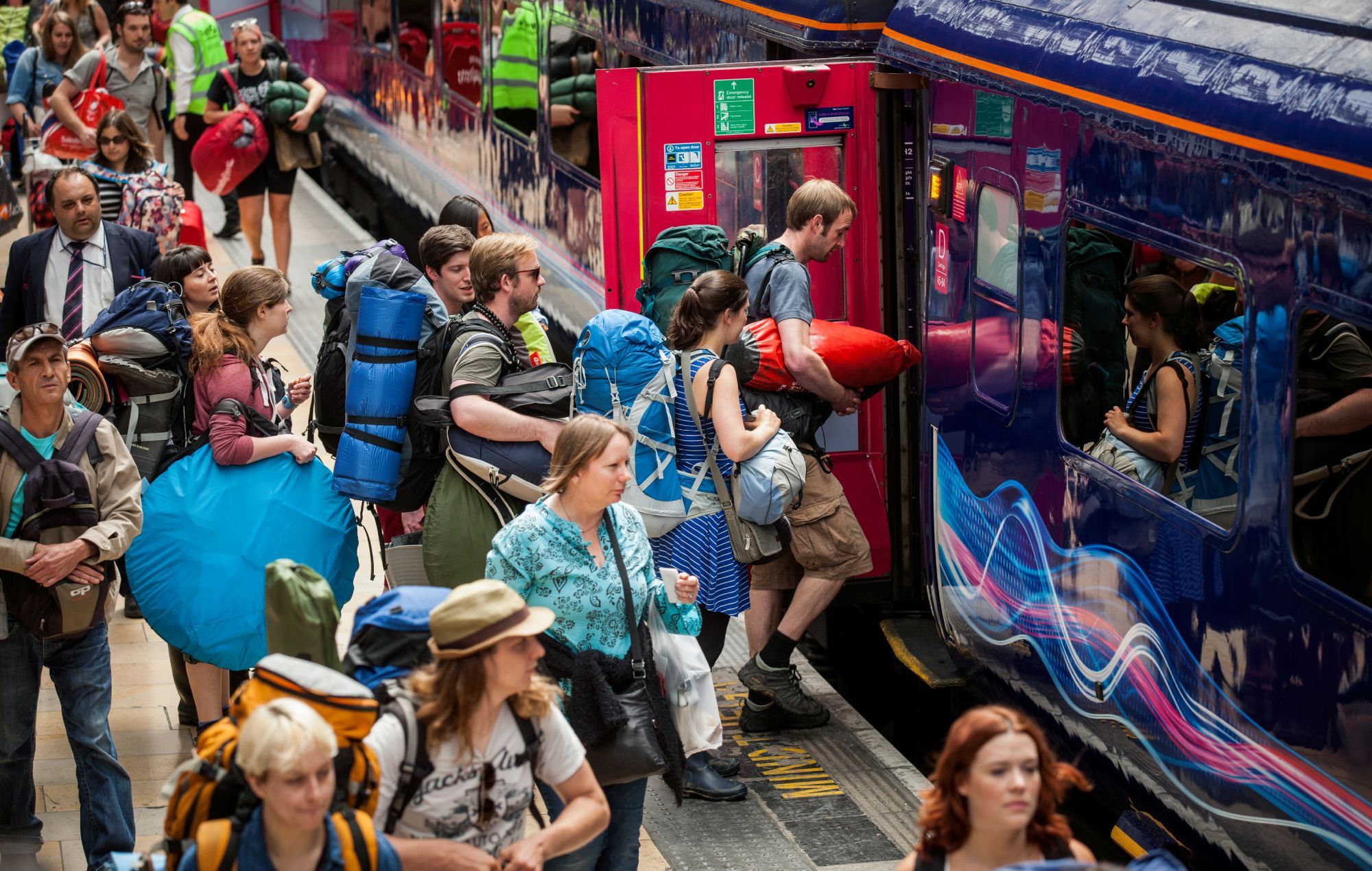 Glastonbury 2022 ticketholders who are planning to travel by train are being advised to make alternative arrangements as Great Britain faces its biggest rail strike since 1989.

It means that those travelling to Pilton, Somerset for Glastonbury on its warm-up day on Wednesday (June 22) and its final day on Sunday (June 26), as well as the usual Monday (June 27) return travel day, will face disruption and a backlog from the strikes.

Rail workers are striking over pay and redundancies. Separately, a strike is also planned on the London Underground on Tuesday (June 21), which is part of a different dispute over job losses and pensions and could also affect people heading to Glastonbury early.

“Working with Network Rail, our plan is to keep as many services running as possible but significant disruption will be inevitable and some parts of the network will not have a service, so passengers should plan their journeys carefully and check their train times,” he said in a statement [via The Guardian].

A special, reduced timetable will be in operation from Monday (June 20) until Sunday (June 26). The full timetable is published tomorrow (June 17) however several operators including Southern, Northern and Transport for Wales have already told passengers not to attempt to travel on strike days.

Network Rail confirmed that large parts of Great Britain (England, Scotland and Wales) would have no passenger services at all on strike days including locations such as Penzance in Cornwall, Bournemouth in Dorset, all of Wales west or north of Cardiff, and no passenger trains running north from Glasgow or Edinburgh.

Train operator GWR added that there will be limited services through the Castle Cary station, the most convenient station for accessing Worthy Farm where Glastonbury is held, from June 21-25.

The significantly reduced timetable with only 20-30 per cent of services operating on strike days will mean that Castle Cary station is only accessible on the Exeter to London route that runs through Taunton [via Somerset County Gazette].

GWR has recommended that customers who’ve already bought a train ticket between London and Castle Cary should check the amended timetable before either changing their travel arrangements or submitting a refund request for their ticket.

It added that other parts of the GWR network are likely to be more affected by the strike action and customers may need to consider alternative ways to travel to a station serving Castle Cary.

Limited train services will start later in the morning. Approximately 50-60 per cent of the normal schedule will run on non-strike days.

Network Rail’s chief executive Andrew Haines described the strike by 40,000 RMT workers as a “high-stakes gamble” by unions, and claimed it would cost the industry £150million. He also argued that it would make pay increases more difficult.

Haines said proposals to modernise to increase safety and productivity were meeting “intransigence…even when terms and conditions are patently anachronistic”.

“We haven’t yet seen movement that gives us real hope,” he added as he confirmed that talks were ongoing.

The RMT has called for direct talks with the government, saying that it was “clear that the Treasury is calling the shots”.

Transport secretary Grant Shapps, meanwhile, said yesterday (June 15) that the strikes were “entirely pointless, counterproductive” and the industry needed to be modernised.

“We protected the railway with £16billion during the pandemic…not a single railway worker lost their jobs or were furloughed. This level of subsidy cannot continue forever.”

Former Labour leader Jeremy Corbyn responded: “The rail companies were preserved and supported and did very well, as did many others in the private sector. Why is he now punishing those people that kept the railway system working, that do all the difficult jobs on the railway, with job losses, inadequate pay and a loss of morale?”

Shapps said that he paid tribute to those people but highlighted that a train driver had a median salary of £59,000, and the median within the rail sector was £44,000.

He added that rail workers had seen wages rise by 39 per cent over the last 10 years compared with seven per cent for police.

RMT general secretary Mick Lynch said last week: “Railway workers have been treated appallingly and despite our best efforts in negotiations, the rail industry with the support of the government has failed to take their concerns seriously.

“We have a cost-of-living crisis, and it is unacceptable for railway workers to either lose their jobs or face another year of a pay freeze when inflation is at 11.1 per cent and rising. Our union will now embark on a sustained campaign of industrial action which will shut down the railway system.”

He continued: “Rail companies are making at least £500million a year in profits, whilst fat cat rail bosses have been paid millions during the COVID pandemic. This unfairness is fuelling our members anger and their determination to win a fair settlement.”

Up to 13 rail operators as well as National Rail are expected to stage walk outs on the aforementioned dates including Chiltern Railways, Southern, CrossCountry, South Western Railway and Northern. See the full list here.

The number of passenger services on the strike days is expected to be limited to about 4,500 compared with 20,000 normally.

Instead of travelling by rail, fans are advised to cycle by heading to the site, which is a few miles to the south of route three on the National Cycle Network. The route runs between Glastonbury and Welles (plan your journey here).

Air travel is also an option. The closest airport is Bristol International Airport and you can see flight details here. However, it’s the least environmentally friendly way to travel.

There are also National Express coaches running from Heathrow Airport to the festival although return tickets must be booked in advance (buy here).

Additionally, there’s a regular bus link from Bristol Airport called the Bristol International Flyer. It can get travellers from the airport to Bristol Temple Meads, while regular buses travel from Temple Meads to the festival’s on-site bus station.

Alternatively ticketholders could purchase last-minute car passes yesterday (June 15) but those are no longer on sale.

The Glastonbury website states that car parks will open at 9pm on Tuesday (June 21) before the festival starts, which will allow for people to arrive throughout the night while traffic volumes are low.

Other events besides Glastonbury that are affected in the same week include the British athletics championships, and Elton John and The Rolling Stones‘ BST Hyde Park concerts.