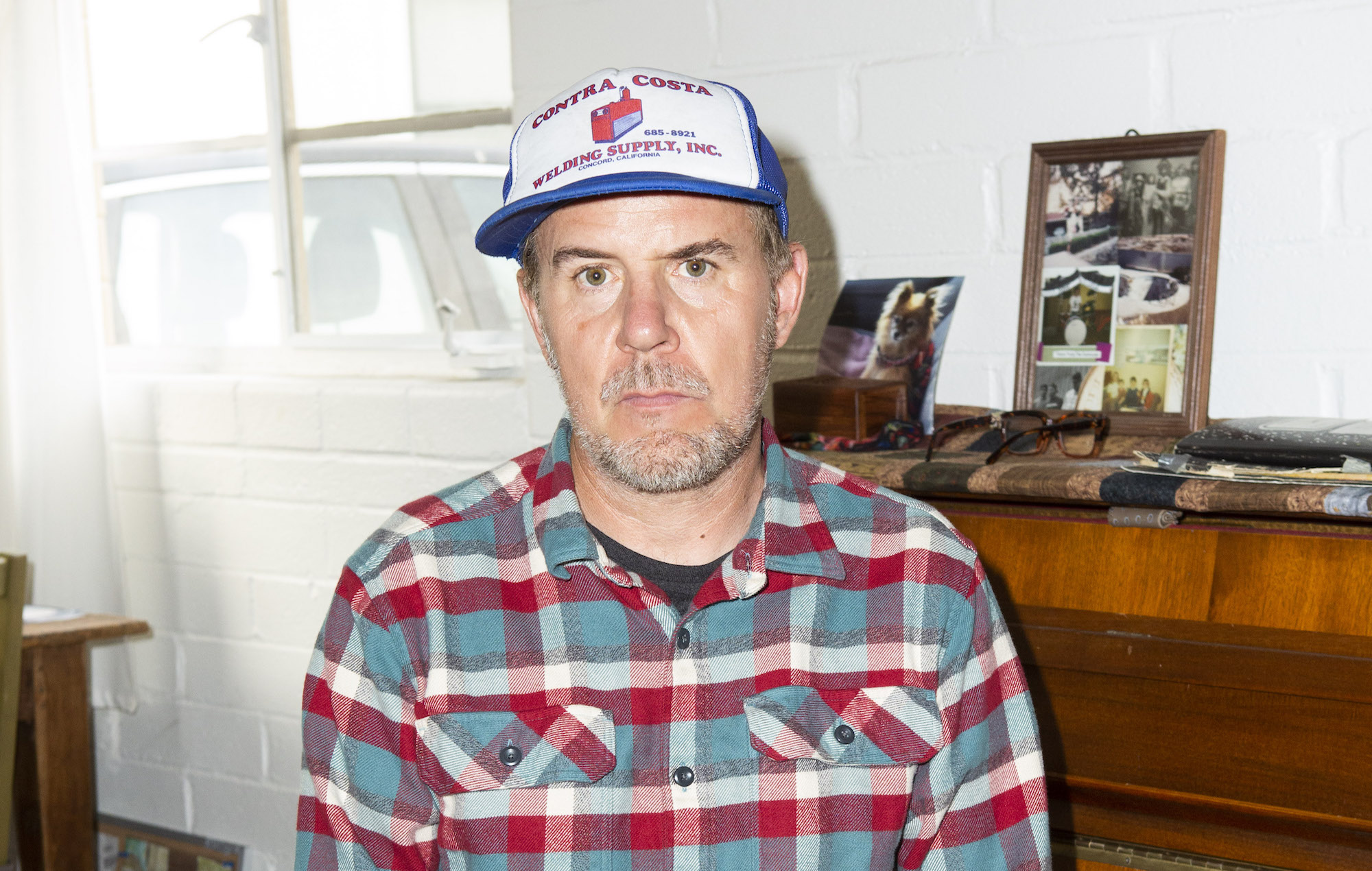 Long-time listeners of Grandaddy won’t be surprised, but frontman Jason Lytle is not feeling overly optimistic right now. “We’re just going to fucking destroy everything,” he tells NME over the phone from LA, where he’s been sheltering in place since the start of the pandemic. “And end up going the way of the dinosaurs.”

Humanity’s extinction wasn’t quite what he had in mind when he wrote the classic ‘The Sophtware Slump‘ 20 years ago, but he wasn’t far off. The album, which has been digitally remastered for a 20th Anniversary Collection boxset that will also include two LPs of rarities and a solo version re-recorded on a wooden piano, gave short shrift to the myth of technological salvation and how our future was supposed to be somehow better. Perfectly capturing the post-millennial comedown before it happened, it wasn’t angry or bitter – just a resigned sigh regarding undeniably truths: people get sad, things die, dreams go unfulfilled.

It also presciently wrestled with environmental apocalypse, describing vistas ruined by discarded household appliances and worn out tyres – a “pastoral dystopia”, as an essay included in the boxset puts it. Yet Lytle wants no credit for foresight. “I didn’t have some grand hidden agenda,” he tells us now of the lyrics and imagery. “It was just basically being out and about, observing people and behaviours, and the way things seemed to be going.”

Besides, he adds, some things are not too hard to predict. “Humans just have a way of making the same dumb mistakes, you know? Put that in a modern context, and there you go.”

As Grandaddy share a new version of ‘Underneath The Weeping Willow’, we talked to Lytle about nostalgia, the importance of lyrics, Trump’s America and dealing with noisy parrots.

With the record’s 20th anniversary looming over the last few years, did you always have this treatment in mind for it?

Lytle: “I moaned and groaned a little, because you have to be in the right mindset to be OK with going back to nostalgia-ville, patting yourself on the back for things you did years ago. That can become a bit of a nuisance. But the thing that made it a lot more interesting is when Jim [Fairchild, guitarist] and I conceived of the solo piano versions – it became something new, and ended up not being such a chore.”

Surely it’s nice to pat yourself on the back once in a while for something that’s a great achievement and it means a lot to fans?

“I did have a point where I had to say to myself: ‘You know what? This is only gonna happen once, and it’s a pretty cool thing, so just be ok with it’. Because I had to go deep – go through all the B-sides, compiling and remastering. I’m not farming this stuff out; I’m doing everything myself. So I had to put it in the right perspective, and properly commit to it.”

Was it easy to rearrange all the songs for piano?

“Each song got its own day two days of focus, and I started with the ones that were already easier for me, to ease into the whole process. So ‘Jed’s Other Poem (Beautiful Ground)’, I’ve been playing that one on piano for years. And ‘Underneath The Weeping Willow’ obviously, which already exists in piano form. But there were ones where I was like: ‘Ugh, not looking forward to that’.”

“‘Crystal Lake’. I was like: ‘Right, what am I gonna do here?’ ‘Miner At The Dial-A-View’ was another one; I was like: ‘Oh shit!’ The challenge of figuring it out was how to make it a little fun for me, you know? How to make it not boring.”

You were supposed to record it in proper studios around LA, but COVID-19 meant you had to do it all in your apartment, just like the original.

“It would’ve been way easier in quiet, self-contained studios but I realised, when it was all said and done, that I’m still winging it like I used to; nothing’s really gotten any easier. I’m still having to think on my toes. Because there were a lot of sound issues due to where I live – it’s not quiet. There’s a busy street, and a fire station, then the gardener comes, and there are helicopters flying overhead. It was also around July 4, so lots of fireworks, and we have wild parrots living nearby too – all of it sabotaging the tape. So I had to pick the right time of day to record.

Which sounds very apt for this particular record?

“There were heatwaves too, so I had to turn the air conditioning off while recording and the house would just start sweltering. It was brutal. There was one song where I thought: ‘fuck it’, and decided to keep it on.”

“I figured if any song was OK to keep the air conditioning on for, that would be the one.”

On the piano versions, do you feel that the lyrics have more focus?

“That’s one of the bonuses. I’m definitely one of those songwriters who kills themselves with lyrics. It’s frustrating if they get overshadowed by the music. They’re such a big piece of the puzzle, for sure. You know, Granddaddy was pretty big in France, and I have a few close friends there and they said: ‘Yeah, we don’t really care about the lyrics. We’re listening to the vibe and the feel’. It blew my mind that the words were just an afterthought to them.”

Can you believe it's been 20 years? We can't either. Pre-order 'The Sophtware Slump…' 20th anniversary collection to commemorate the passing of time and support indie retail. Available at link in bio!

Would you agree that ‘The Sophtware Slump’ described a world that had already been somewhat lost in 2000, and now it’s like people can’t even remember it?

And the disregard for nature is only intensifying?

“I just got done taking a month-long road trip. I was camping in very remote areas, up in the mountains. I was mountain biking, running, hiking, fishing; it was great. But I discovered there were a lot of really loud, obnoxious, terrible Trump-supporting, stupid Americans, literally everywhere. We’re way out in the middle of nowhere but they’d have their RV’s and their caravans, and these huge Trump banners. I was like: ‘What the fuck?’”

“I was still on the Western side of the country, too. It gets even worse when you get towards the middle.”

“Yeah, I was just scratching the surface of this shit. Because living in LA, or California, this more liberal, forward-thinking place, a lot of people don’t know that the rest of the country is just really bone-headed, don’t recycle, don’t give a shit people – just a self-centred, consumer culture. It’s really depressing, and makes me think: ‘Man, this is just not gonna get better’. We’re so outnumbered, so I just have to sit back and keep my fucking mouth shut.”

With regards to the future, is there more to come from Grandaddy?

“Yeah, I have tonnes of songs, almost too many. I have a solo record I’m working on, an idea I’ve been wanting to do for years, and that’s gonna come first. But I am making another Granddaddy record.”

Was there a band meeting after the tragic passing of Kevin [Garcia, bassist] where you all agreed: ‘We’re doing this, we’re carrying on’?

“No. I love all the other guys to death, but it’s my baby, and I don’t want to talk about who’s gonna be involved to what degree. It’s almost like this thing is coming full-circle – the first Granddaddy endeavours were 100 per cent me. It was my idea, like bringing a little baby into the world, this little helpless thing. Granddaddy might end the same way though – just limping and bald and feeble.”

Grandaddy release ‘The Sophtware Slump … On A Wooden Piano’ on November 20.